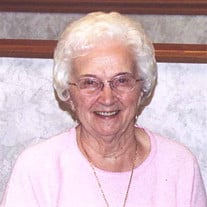 Esther L. Steinke, age 90, of Menomonie, WI passed away Wednesday, November 19, 2014 at Comforts of Home in Menomonie. The former Esther Lorraine Todd was born June 8, 1924 in the Town of Eau Galle, Dunn Co. Wisconsin to Clarence and Amelia (Schrader) Todd. She was raised in the Town of Eau Galle and graduated from Durand High School. On November 5, 1943, Esther married Carl Steinke in Durand. She worked as a cook for the Menomonie School District for over 30 years, retiring in the early 1990’s. Esther also delivered “Meals on Wheels” for many years. Esther loved to crochet and put jigsaw puzzles together. She also enjoyed a car ride and would go wherever you were going. Her family was very important to her and she will be sadly missed. Esther is survived by her children, Merna (Len) Frank of Menomonie, Marietta (Dave) Wilsey of Menomonie, Charles (Terry) Steinke of Grand Forks ND, Todd (Esther) Steinke of Washington MO, and Sara (Cal) Falkner of Menomonie; her grandchildren, David (Lisa) Frank, Paula (Daryl) Schultz, Steven (Amy) Henderson, Kathleen (Kevin) Jensen, Jennifer (Tim) Koleski, Joshua (Lindsey) Steinke, Richard Steinke, Rana Steinke, Cassie (Justin) Klemm and Jason Falkner; step-granddaughter, Sadie Gilbraith; 12 great-grandchildren; two nephews; and her neighbor Ron Martin; as well as other relatives and friends. She was preceded in death by her parents; her husband Carl in Dec. 1995; a brother Galen Todd, sister-in-law Evelyn Todd and grandson-in-law Jason Werner. The family would like to thank the staff at Comforts of Home Memory Care and MCHS Home, Health and Hospice for their loving care of Esther. Funeral services will be held at 11:00 a.m. Monday, Nov. 24, 2014 at Peace Lutheran Church, with Pastor Kristine Stedje officiating. Visitation will be from 9:00 to11:00 prior to the service at the church. Olson Funeral Home of Menomonie is serving the family.

The family of Esther L. Steinke created this Life Tributes page to make it easy to share your memories.