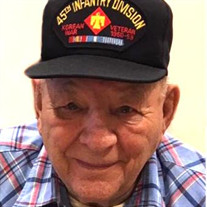 Elwood L. Varney was born June 24, 1928 to Irving and Anna (Lorenzen) Varney in Wibaux, Montana. He passed away on Sunday, July 10, 2016 at the Mayo Clinic Health System in Menomonie, WI. He had currently been living at the Deer View home within the Neighbors of Dunn County complex for about a year. Elwood was inducted into the US Army through draft in 1951, and served in the artillery during the Korean War. He was attached to the 45th Infantry Division and served one year in Korea. He was extremely proud to have served his country and in later years enjoyed connecting with other veterans. He was involved with the DAV and the American Legion at various times throughout his life. After the Army, Elwood married Bonnie Rae Mouw in 1953, they had three daughters. They were divorced in 1971. He had a beef farm, as well as worked road construction. Elwood also loved to play cribbage with anyone and everyone. People of all ages would come to his house just to have a game with him. He taught many people to play the game and you’d always be in for a few good stories while you were there. He also played the game with some of his Great-Grandson’s. Elwood is survived by his sisters: Margaret Perry and Gladys Burns. His daughters: Barbara (Jim) Lorenzen, Colfax, Sandra (Kerry) Johnson, Boyceville and Brenda (Bruce) Blair, Welch, MN. Grandchildren: Dean Bundy (Fiancé` Heather Kizer), Bridgit (Matthew) Chilson, Casey (Jason) Peterson, Brandon (Rachael) Lorenzen, Jamie (Jeff) McRoberts, Heather (Jeremy) Martineau, Nate and Matthew Blair, David (Vanessa) Johnson, Chris (Katrin) Johnson. Great-Grandchildren: Tyler and Trent Peterson, Dawson and Alison McRoberts, Cole and Tanner Chilson, Katlyn Lorenzen, James Johnson, Avery, Trenton, Zoey Johnson, Terrin Gripp and her children Deonte and Justice Mildon, Caitlyn and Vanessa Kizer. Elwood was preceded in death by his parents, Brothers: Clarence, Edward, Donald and Glen. Funeral services will be held at 11:00 a.m. Thursday, July 14, 2016 at Olson Funeral Home in Menomonie. Burial will take place at Sherman Cemetery, Township of Sherman, Dunn County with military honors by the Boyceville Harmon-Harris Legion Post #314. There will be visitation one hour prior to the service on Thursday at the funeral home.

Elwood L. Varney was born June 24, 1928 to Irving and Anna (Lorenzen) Varney in Wibaux, Montana. He passed away on Sunday, July 10, 2016 at the Mayo Clinic Health System in Menomonie, WI. He had currently been living at the Deer View home... View Obituary & Service Information

The family of Elwood L. Varney created this Life Tributes page to make it easy to share your memories.