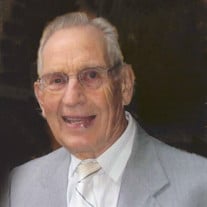 Elmer Harland Hanson, age 90, of Elk Mound, WI went home to be with his heavenly father on Tuesday, February 24, 2015 at Comforts of Home in Menomonie. Elmer was born on October 21, 1924 at Luther Hospital in Eau Claire, Wisconsin to Harold and Marie (Jensen) Hanson. He was a graduate of Elk Mound High School and Augsburg College. On September 29, 1951 Elmer married Beverly Hanson. Their home was Elmer’s family farm until 1987, when they built a home in the woods adjacent to the farm. Elmer was born to be a farmer and prior to his service in the U.S. Marine Corps, he worked for his uncle Martin and then at a nearby farm at the Timms. In 1952, he and Beverly moved to the family farm and purchased the cattle, machinery and land from his father. He was early to adapt to new technology, building a modern barn in 1953, adding a bulk milk tank in 1954, and a pipeline for milking convenience in the early 60’s. He took great pride in taking care of the land, putting in contour strips, crop rotation and waterways. He always planted rows of corn as straight as an arrow. He served on the Wisconsin Forage Council as director and vice-president. He knew the value of excellent quality alfalfa for dairy production, and received many awards for quality alfalfa. His Christian faith was a very important part of Elmer’s life. He served on the church council at Shepherd of the Hill Lutheran Church, was in the choir, also being active in the adult Sunday school. Elmer’s true passion was farming. After selling the farm to Loren in 1994, he continued to be an active part of the farming operation, driving the John Deere tractors up until July of 2013. He also enjoyed cutting wood, and going to plays and musicals with Beverly. Grandpa loved his grandchildren and always had a big smile and a bear hug for them. He was a kind, gentle man and was well loved and respected. Elmer and Beverly enjoyed traveling. They spent several of their later years volunteering for SOWERS (servants on wheels ever ready) at various Christian facilities and camps in Arizona, Florida and Texas, usually for the month of March. Elmer is survived by his three children; Loren (Diane) Hanson, Marcia (Keith) Meyer, Devon (Jim) Pedersen. Twelve grandchildren; Michael (friend Mary Lauer) Hanson, Lisa (Mark) Barta, Angela (Paul) Bocksell, Danita (Chris) Wolf, Jacob Pedersen, Teresa (Dustin) Marker, Andrea (Aaron) Wolf, Daniel (Marie) Pedersen, Joel (Jerica) Meyer, Timothy (friend Amanda Howe) Hanson, Aaron (Amber) Pedersen, Sarah Pedersen. Thirteen great-grandchildren; Mindy and Levi Barta, Lukas, Weston, Ava and Dahlia Bocksell, Hailey and Jackson Wolf, Morgan and Trevor Wolf, Isaac Pedersen, Tori and Kaleb Meyer. He is also survived by his sister Evelyn Kilde, brother Rev. Herbert (Joyce) Hanson, sister-in-law Anabelle (Rev. Leonard) Dalberg, brothers-in-law; Charles (Carol) Hanson, Dale (Annette) Hanson. Many nieces, nephews, and other relatives and friends. He was preceded in death by his parents, Harold and Marie Hanson; his wife, Beverly; sister, Mildred Peterson; brothers-in-law, Charles Peterson and Rev. John Kilde. Funeral services will be held at 12:00 (noon) on Thursday, March 5, 2015 at Shepherd of the Hill Lutheran Church in Elk Mound, WI with Pastor Mary Eide officiating. There will be visitation from 5:00 p.m. to 8:00 p.m. Wednesday at Olson Funeral Home in Menomonie and at the church one hour prior to the service on Thursday. Military honors will be conducted by Menomonie Veterans Honor Guard. Burial will be in Barum Cemetery at a later date. Memorials will be given to charitable organizations in Elmer’s memory.

Elmer Harland Hanson, age 90, of Elk Mound, WI went home to be with his heavenly father on Tuesday, February 24, 2015 at Comforts of Home in Menomonie. Elmer was born on October 21, 1924 at Luther Hospital in Eau Claire, Wisconsin to Harold... View Obituary & Service Information

The family of Elmer H. Hanson created this Life Tributes page to make it easy to share your memories.