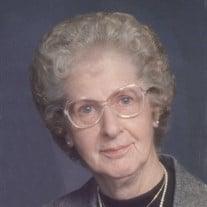 Eliza M. Grandstaff, age 98, of Menomonie, WI passed away Tuesday, March 7, 2017 at American Lutheran Home in Menomonie. The former Eliza Marie Repseth was born Jan. 9, 1919 in Menomonie, WI to Peter and Esther (Schroeder) Repseth. She was baptized Feb. 9, 1919 at the old North Menomonie Evangelical Norwegian Lutheran Church and confirmed May 29, 1932 at Our Savior’s Lutheran Church. Eliza attended North Menomonie Grade School and graduated from Menomonie High School in 1938. Following graduation she worked as Recreation Director for the National Youth Administration. Upon closing of the N.Y.A she worked as a beauty operator for Grace Eick at the Charm Shoppe in Menomonie. When W.W.II broke out Liza became interested in serving her country. She was inducted and graduated as a T5 Surgical Technician in the First Purple Heart Unit. She trained at Fort Oglethorpe, Georgia and upon graduating served in the following army hospitals: McCaw General, Walla Walla WA, Mayo General, Galesburg IL, and Walter Reed Hospital, Washington D.C. She was honorably discharged in October 1946. Time spent caring for the wounded was an experience she never forgot. Following her military service Liza went to work at Benson Optical Company in Eau Claire, WI. It was there she met Preston Grandstaff and they married Oct. 9, 1952. In 1954 they moved to Salina, KS where her husband became manager of Duffens Contact Lens and Optical Co. They became active members of St. John’s Lutheran Church in Salina and made many lasting friendships. Liza enjoyed many hobbies including, ballroom, tap and square dancing, animals, the Humane Society, playing cards, sewing, art and design and crocheting. She was the founder and original editor of the International Square Dance Magazine of Kansas called the “Travel On”. After her husband’s retirement they moved back to Menomonie in 1984 to be near her sister. Liza then became very active at Christ Lutheran Church. In 2014, she moved to Autumn Village and on Sept. 1, 2015 moved to American Lutheran Home where she remained until her death. Eliza is survived by nephew James (Linda) Grandstaff, cousins and very special friends, Dick and Laila Davis and Kelly Steinmeyer and family. She was preceded in death by her parents; her husband Preston; sister, Mernice (Don) Duesing; and brother-in-law Bob (Jane) Grandstaff; and a nephew, Rex Grandstaff. A Memorial Service will be held at 11:00 a.m. Saturday, April 22, 2017 at Olson Funeral Home in Menomonie, WI with Pastor Jeanne Warner officiating. There will be visitation at the funeral home one hour prior to the service. Burial will be in Christ Lutheran Halvorson Cemetery in Menomonie with military honors by Menomonie Veterans Honor Guard.

The family of Eliza M Grandstaff created this Life Tributes page to make it easy to share your memories.