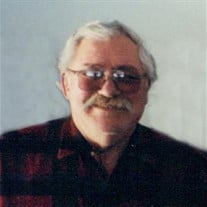 Eldon J. Sutliff, age 86, of Boyceville, WI passed away Monday, December 15, 2014 at The Neighbors of Dunn County in Menomonie. He was born Oct. 25, 1928 in Rice Lake, WI to Ralph and Zelma (Schudlick)Sutliff. At a young age the family moved to a farm west of Connorsville, along Bolen Creek, where Eldon was raised. He attended Bolen Grade School and Glenwood City High School. In January of 1951, Eldon joined the U.S. Army Paratroopers and proudly had 25 jumps to his credit. Eldon married Dolores Dougherty on May 31, 1951. To this union, six children were born, Trudy, Traci, Kevin and Michael and two stillborn daughters. For many years, Eldon was a milk hauler out of the Boyceville and surrounding area, starting with canned milk. He enjoyed visiting with the farmers and teasing with their kids. He traveled many roads and loved to talk to people, making friends and acquaintances along the way. After selling the milk route, Eldon was a school bus driver for Boyceville Schools and also sold aerial farm photos. Eldon was active in the Boyceville community, serving on the Fire Dept. and Ambulance for many years. He was a member of the Boyceville Booster Club, one of the founders of the Snojammers Snowmobile Club, also the County and State Snowmobile Assoc. He was also a member of Harmon-Harris American Legion Post 314 of Boyceville. Eldon was most proud of his children, grandchildren, and great-grandchildren and enjoyed attending their sports activities and spending time, joking and laughing with them. Eldon is survived by his wife, Dolores; his children, Trudy Larson of Menomonie, Traci Suckow of Eau Claire, Kevin and Michael of Boyceville; grandchildren, Heather (Dan) Mills of De Forest, Travis Larson of Eau Claire, Tyler (Kristi) Suckow of Andover MN, Jared Suckow of Eau Claire, Hayley Suckow of Menomonie, Kyle (Casey) Sutliff of Boyceville, Erik (Morgan) Sutliff of Chippewa Falls, Teralyn Sutliff (Nate Buss) of Boyceville; great-grandchildren, Madi, Sam, Borden, Boston and Kane; a brother Ronald (Darlene) Sutliff of Rice Lake; a sister Zeona Taylor of Cocoa, FL; sister-in-law and brother-in-law Pat and Barry Marlett of Menomonie; many nieces, nephews, other relatives and friends. He was preceded in death by his parents; two brothers, four sisters and son-in-law John Larson. There will be visitation from 4:00 to 7:00 p.m. Thursday, Dec. 18, 2014 at Olson Funeral Home in Menomonie followed by military honors by Boyceville Harmon-Harris American Legion Post 314.

Eldon J. Sutliff, age 86, of Boyceville, WI passed away Monday, December 15, 2014 at The Neighbors of Dunn County in Menomonie. He was born Oct. 25, 1928 in Rice Lake, WI to Ralph and Zelma (Schudlick)Sutliff. At a young age the family moved... View Obituary & Service Information

The family of Eldon J. Sutliff created this Life Tributes page to make it easy to share your memories.