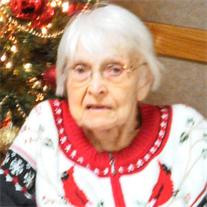 Eileen LaVerne Arnold age 91, of Oshkosh, WI was accepted into the loving arms of her Lord and Savior on September 11, 2014 at Northpoint Medical Rehabilitation Center in Oshkosh. Eileen graduated from Menomonie High School in 1941. She went on to earn her bachelors degree in Home Economics from Stout State University in Menomonie. Later in her career she obtained a masters degree in Guidance Counseling from Winona State University, Winona, MN. She began her teaching career in Alma, WI. Then she met the love of her life Delaine (Bud) Arnold on a blind date. The couple were married on April 28, 1951 in Stillwater, MN. The couple then moved to the Arnold family farm in rural Canton, MN and spent the majority of their married life there. Eileen taught Home Economics at Peterson High School, Peterson, MN until her retirement in 1986. She was a foster parent to many troubled youths through the years, mentoring and helping all youths in need. To this union were born two children Charles (Charlie) and Cynthia (Cindy). In her retirement years she traveled extensively going to Ireland, Alaska, several trips to the Caribbean, Canada, a cruise on the Mississippi, Branson, MO and wintering many years in Texas. In 2010 she came to live with her daughter and son in law, which she again traveled to many sites in the southwest including Carlsbad Caverns, White Sands, Albuquerque and Santa Fe in NM. She was preceded in death by her husband Bud in 1999, parents Eula and Charles Riley, her brother Keith Riley and sister Lucille Nelson She is survived by her son Charlie of Baraboo, WI and Cindy Torgerson (Jim) of Oshkosh, WI, She is further survived by her grandchildren Riley Arnold of Baraboo, Laura Arnold of Kenosha, Erin Torgerson of Oshkosh, Andrine (Matt) Klingforth of Boise ID, James Torgerson Jr. (Gizzel) of Fort Carson CO, Todd Torgerson, Rice Lake, Thomas Torgerson, Menomonie, and Timothy Torgerson of Rice Lake. She is further survived by 6 great grandchildren and a sister in law Vivian Riley of Menomonie The family would like to more than thank the staff of Northpoint Medical and Rehabilitation Center, Springbrook Unit. You are truly angels on earth. We would also like to thank Generations Hospice for the loving extra care provided to our Mom, you provided a great benefit to her, which was much appreciated. Memorial services will be held at 11:00 a.m. Friday, September 19, 2014 at First Congregational Church in Menomonie, WI with Pastor Rob Mac Dougall officating. Visitation will be one hour prior to the service. Burial will be at a later date at the Lenora Cemetery, rural Canton, MN near the Arnold family farm,

Eileen LaVerne Arnold age 91, of Oshkosh, WI was accepted into the loving arms of her Lord and Savior on September 11, 2014 at Northpoint Medical Rehabilitation Center in Oshkosh. Eileen graduated from Menomonie High School in 1941. She went... View Obituary & Service Information

The family of Eileen Arnold Obituary created this Life Tributes page to make it easy to share your memories.

Eileen LaVerne Arnold age 91, of Oshkosh, WI was accepted into...