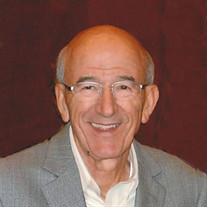 Edward R. Ristow, age 81, of Menomonie, WI lost his battle with Alzheimer’s disease surrounded by the love of his family on Thursday, September 13, 2018. He was born June 14, 1937 in Nekoosa, WI to Edward Ristow, Sr. and Ruth (Dunham). He grew up in Wisconsin Rapids and graduated from Lincoln High School in 1955. Upon graduation, Ed entered the United States Army and spent time in Korea on the 38th Parallel. In 1957, he was honorably discharged and headed to college – first at UW-Stevens Point where he played basketball, then transferring to UW-La Crosse. Ed graduated from UW-La Crosse in 1962 with a degree in Physical Education. Ed married the love of his life, Judith Smith, on April 19, 1962 at United Methodist Church in La Crosse, WI. Together they moved to Milwaukee to pursue their teaching careers. Ed was a teacher and baseball, basketball and track coach at Riverside High School in Milwaukee from 1962-1968 before taking a head basketball coaching and teaching position in Marshfield, WI. Ed and Judy left Marshfield in 1976 and headed to Eau Claire, WI where Ed became the head principal at Altoona High School. Ed remained the head principal in Altoona until his retirement in 1992. Ed and Judy then moved to Tainter Lake in Menomonie, WI where he spent his time fishing, hunting, golfing, shooting pool and enjoying the good life. Ed spent his winters at his home in Sarasota, Florida enjoying the sunshine, and entertaining friends and family around the pool with his many stories and crazy jokes! Ed is survived by: His wife of 56 years, Judith of Menomonie Two daughters and one son: Carrie (Ken) Meyer of Minnetonka, MN Jill (Nick) Hughes of Wauwatosa, WI Ross (Katherine) Ristow of Kiel, WI His sister, Charmaine (Ben) Ristow-Hitzemann, of Verona, WI His sister-in-law and brother-in-law, Merry and Pat Deming, of De Pere, WI His sister-in-law and brother-in-law, Sarah and Bill Coleman, of La Crosse, WI Ed will be forever remembered by his six grandchildren - Kristen Hathaway, Mara Hathaway, Ethan Hughes, Lauren Hughes, Eddie Ristow, Claire Ristow and two step-grandchildren, Marie Meyer and Christian Meyer. Nieces, nephews, extended family and dear friends as well as the hundreds of students he taught and coached over the years will also fondly remember Ed. A special thank you to the people at Comforts of Home in Menomonie for becoming Ed’s second family and for their loving care and support during his final days. He was preceded in death by his parents, Edward Sr. and Ruth. Memorial service will be held at Christ Lutheran Church in Menomonie on Saturday, September 29. Visitation from 10-11, service at 11:00 with Pastor Randy Skow-Anderson officiating. Military honors will be conducted by Menomonie Veterans Honor Guard. Following the service, family and friends are invited to Stout Ale House, 1501 North Broadway, Menomonie, for snacks, drinks, and the opportunity to share memories and stories about Ed! Olson Funeral Home in Menomonie is serving the family. In lieu of flowers, memorial donations may be made to the Alzheimer’s Association or charity of choice. We are comforted knowing that Ed Ristow knows who Ed Ristow is again.

The family of Edward R. Ristow Jr. created this Life Tributes page to make it easy to share your memories.