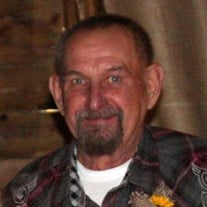 Duane L. “Dewey” Schutts, age 70, of Boyceville, WI passed away Sunday, Nov. 29, 2015 at his home. He was born July 6, 1945 in Menomonie, WI to Leonard R. and Edna (Blake) Schutts. He was raised in the Boyceville area and graduated from Boyceville High School. While in high school he was an athlete including being a State Wrestling Champion. On Dec. 1, 1966 Dewey enlisted in the U.S. Army, serving during the Vietnam War. He earned a purple heart, as an E5 Sgt., and was honorably discharged from the service Dewey married Pam Nosko and later divorced. Dewey bought a farm and was a dairy farmer in the Connorsville area for many years. He took great pride in his farm and devoted many hours to its upkeep. He also worked for Century Fence and was an electrician for Halvorson’s in Prairie Farm for many years. Dewey later married Lonna Lake in Connorsville. Dewey enjoyed camping with his family, playing softball, hunting and fishing. He was an avid sports fan, and loved watching the Brewers, Packers and Badgers. Dewey is survived by his children, Lisa (Todd) Stuart, Tina (Jamie Bock) Talmage, Tessa (Matt) Feeney and Tonya (Nate Donaldson) Schutts; his grandchildren, Brittany (Dylan) Iverson, Melissa Stuart, Tristan Talmage, Tori and Tyra Kostman, Isabelle and Aiden Feeney; a sister, Charleen (Charlie) Larson; also survived by nieces, nephews, other relatives and friends; and further survived by his animals, Jake, Lloyd, Bud and Kat. He was preceded in death by his parents, brother Donald Schutts; sisters, Delores Schultz and Karen Schutts; and an infant brother Gerald. A Memorial Service will be held at 11:00 a.m. Friday, Dec. 4, 2015 at Trinity Lutheran Church in Boyceville, WI, with Pastor Brad Peterson officiating. There will be visitation from 4:00 to 8:00 p.m. Thursday at Olson Funeral Home in Menomonie and an hour prior to the service on Friday at the church. Burial will be in Sherman Cemetery in the Town of Sherman, Dunn Co. WI with military honors by Boyceville American Legion Post 314.

The family of Duane "Dewey" L. Schutts created this Life Tributes page to make it easy to share your memories.