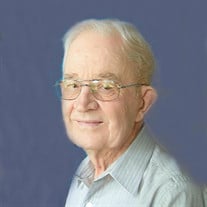 Duane Bernard Barnes, age 91, of Stevens Point, WI (formerly of Menomonie and Racine), passed away Monday, June 12, 2017, at St Michael’s Hospital, after a long battle with cancer. Duane was born November 1, 1925, in Spring Valley, WI, the son of Charles and Esther Barnes. As a child, he attended a one room school house. His early morning daily chore was to start the wood stove, in order to keep the little school house warm. He took his responsibility seriously. But, he was a typical little boy full of fun and adventure. Once he even tried flying off the barn when his brother Cyril and friends convinced him he could fly! In 1944, he saw a lovely young lady with tall white boots at the local dime store. Virginia Lou Prothero was the love of his life and they were married on September 12, 1945. Duane and Virginia were blessed with three daughters. Duane graduated from Stout Normal School. Then they moved to Racine, where he received his bachelor’s and master’s degrees (UW / Mil). He spent 32 years teaching and being an elementary school principal. His love of education showed in so many ways. As a principal, his school was very progressive using the latest methods and techniques in the classroom. He was sent to Harvard in 1963 to take classes on ‘team teaching’. He then came back to Racine and taught other teachers what he had learned, as well as implementing this new concept in his own school. Most impressive was that he knew all his 800 students by name! And he chose every student’s teacher for the following year, based on personalities, style of teaching, and the needs of the student. Duane retired at the age of 57, in 1983. They purchased land north of Menomonie and built a home in the beautiful rolling hills. He and “Gin” enjoyed 25 years of retirement there; growing gardens, logging, cutting lumber, woodworking, cross-country skiing, planting trees, growing shitake mushrooms and creating their own little paradise. But Duane missed teaching, so he started subbing at Missionary Alliance School. Then he taught a class on ‘Shitake Mushrooms’ at the tech. He then took a long-term subbing position teaching math and science, which he really enjoyed. His love for teaching never ended. Duane is survived by his daughters, Sharon (Wallace) Gehring of Montello, Lynda (Jack) Overgaard of Mosinee, Gayla (John) Caretta of Racine; grandchildren, John and Jennifer Gehring Ryan (Carrie) Overgaard, Angel Overgaard (David Rettenmaier), and Holly Caretta-Weyer (Andy Weyer); great-grandchildren, Amanda and Joe Gehring, and Porter Overgaard; sister; Janet Wendt, sisters-in-law Joyce Prochnow, Mildred Barnes, Charlotte Prothero, other relatives and friends. He was preceded in death by his wife Virginia (Prothero), his parents, Charles and Esther Barnes, brother Cyril Barnes, grand-daughter Abby Caretta, brothers-in-law Roy Wendt, Walter Prochnow, and Ed Prothero. Funeral services will be held at 2:00 p.m. Saturday, June 17, 2017, at Olson Funeral Home in Menomonie, with Pastor Mike Shay officiating. Visitation will be at the funeral home from 1:00 p.m. until the time of service. Burial will be in Christ Lutheran Halvorson Cemetery in Menomonie. A special thanks to the wonderful caregivers at Brookdale Senior Living, Heartland Hospice, and St Michael’s Hospital. And the family would like to especially thank Mike Corrigan for his wonderful visits with Duane.

The family of Duane B. Barnes created this Life Tributes page to make it easy to share your memories.