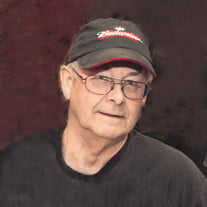 Douglas Lloyd Meriwether, age 72, of Menomonie, Wisconsin, passed away on Friday, November 11th, 2016 at Mayo Clinic Health System - Menomonie. He was born Sept. 30, 1944 in Minnesota to James and Violet "Vie" (Seablom) Meriwether, he lived in many places, but spent most of his life in Menomonie, WI. Doug married Jean Husby in 1971. They had three children, Allison, Lindsay and Brock. They later divorced. He fully enjoyed his retirement from 3M in Menomonie. Doug was a passionate man who enjoyed cars and racing. In his spare time he loved building and restoring classic cars, keeping track of the price of gas, traveling the US, and visiting with friends at Jakes. Doug was very proud of his kids and grandkids, daughter Allison (Bruce) Schultz of Havana, IL, daughter Lindsay Lee of Menomonie, WI, son Brock (Bridget) Meriwether of Menomonie, WI. Grandchildren Sydney, Rianna, Jaden, and Randi Schultz, Carter, Colby, and Cashton Lee, Caitlyn and Cole French, and Clay Meriwether. He is also survived by his brother, Scott (Rogene) Meriwether, several nieces and nephews and many other friends and family. He was preceded in death by his parents, sister, Krissan Maher, and his beloved dog, Buddy. Visitation will be from 4:00 to 7:00 p.m. Tuesday, Nov. 15, 2016 at Olson Funeral Home in Menomonie.

The family of Douglas L. Meriwether created this Life Tributes page to make it easy to share your memories.