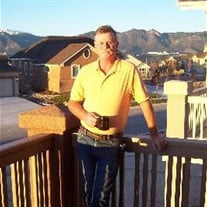 Douglas David Maska, Sr., age 67, passed away at United Hospital in St. Paul, MN, after a long battle with cancer. His son (DJ) and daughter-in-law (Amanda) were by his side when he left this world and met his Creator with open arms. Doug was born on August 29, 1951 to Francis and Pastola (Hankins) Maska at Camp Carson Army Hospital in Colorado Springs, Colorado. After graduating from Widefield High School in 1969, Doug joined the US Navy and served from 1971-1974. Upon returning, Doug worked in general construction, and it was during this time that he married Heidy (Moore) Schultz (October 4, 1975-1981) and they had a son, Douglas (DJ) David Maska, Jr., in 1977. Doug continued to work in general construction and then later, from 1988-1994, he worked for his brother, Bob, at their family owned “Maska Body Shop.” In 1994, Doug began working in construction again and then became a Superintendent for Classic Homes in Colorado Springs until he retired in 2014. He took great pride in the 16 years he worked with them and loved building homes. Doug loved the Colorado mountains and his hobbies included watching football and baseball, Nascar and muscle cars, 60’s rock and country music, riding his Harley motorcycle down to New Mexico and Texas with his buddy, Don Wilson, spending time with friends Chuck Eberhardt and Johnny Keyes and several others. Most recently, his hobbies included cruising around his Wisconsin land in his Gator with his grandchildren. Doug is preceded in death by his parents and grandparents. He is survived by his son, Douglas (DJ) David Maska, Jr., daughter-in-law, Amanda (Krig), and 3 grandchildren, Ashlyn (11), Brady (9) and Katy (8), who loved on Doug and showered him with countless hand-drawn pictures, hugs and snuggles. They shared life with him (and of course, ice cream) on a day to day basis, as he moved a year and a half ago from Colorado to Wisconsin, less than a quarter mile down the road from them on the same driveway. Doug is also survived by sisters Sharon Revious (John), Marilyn Stutts (Jerry), brothers Bob Maska (Pat), Gary Maska (Vicki) and youngest sister, Sandra Cross (Jeff). A gathering in Doug’s memory will be held from 5-8 pm at Menomonie Alliance Church in the Fireside Room on Friday, May 17, 2019.

Douglas David Maska, Sr., age 67, passed away at United Hospital in St. Paul, MN, after a long battle with cancer. His son (DJ) and daughter-in-law (Amanda) were by his side when he left this world and met his Creator with open arms. Doug... View Obituary & Service Information

The family of Douglas D. Maska created this Life Tributes page to make it easy to share your memories.