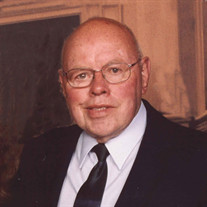 Douglas A. “Hoppy” Holzhueter, age 84, of Menomonie, WI passed away Sunday, Oct. 30, 2016 at the American Lutheran Home with hospice. Doug was born Feb. 14, 1932 in Menomonie, WI to Herman and Elizabeth (McCurtain) Holzhueter. He was raised in the Menomonie area and graduated from Dunn County Agricultural School (Aggie) in 1950. In 1964, Doug married Barbara Knutson in Menomonie and together they raised one son Mike. They later divorced. Doug operated the family farm in the Town of Menomonie until 1973. He then worked various jobs, most recently as custodian for the Menomonie School District until his retirement. Doug enjoyed bowling, playing horse shoe, local sports as well as being a Packer, Badgers and Brewer fan. He had a passion for playing Euchre, and has been known to overbid a time or two. On Sept. 17, 2000, Doug married Joyce Harnisch in Menomonie and together they enjoyed traveling, playing cards and going to Packer, Badgers and Brewer games. Doug is survived by his son, Michael (Debra) Holzhueter and their children, Jayden, Max and Amanda Holzhueter; step-children, Dawn (Jacob) Utphall and their children, Hannah and Caden Berg, Heidi (Ryan) Stair and their daughter, Danielle Stair and Michael (Jennifer) Berg; two sisters, Mary Labs and Ann Holzhueter (Georganna Johnston); and a brother-in-law, Al Siler. He was preceded in death by his parents; his wife, Joyce Holzhueter; a sister, Lois Siler and brother-in-law, Robert Labs. Funeral services will be held at 11:00 a.m. Friday, Nov. 4, 2016 at St. Paul’s Lutheran Church in Menomonie, with Pastor Aaron Schulz officiating. There will be visitation from 4:00 to 7:00 p.m. Thursday at Olson Funeral Home in Menomonie and at the church one hour prior to the service on Friday. A private burial will be in St. Paul’s Lutheran Church Cemetery at a later date.

The family of Douglas A. Holzhueter created this Life Tributes page to make it easy to share your memories.