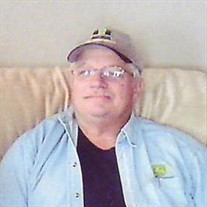 Douglas J. Hellendrung, age 66, of Boyceville WI passed away at home surrounded by his loved ones Wednesday, February 3 after a battle with cancer. Douglas was born March 29, 1949 in Hennepin County, MN to Ken and Rose Hellendrung. He grew up in the Knapp area and graduated from Boyceville High School in 1967. He was enlisted in the Army from 1969-1971. Douglas married Sherrilyn Hedlund on September 3, 1971 in South Dakota. They were life-long members of Trinity Lutheran Church in Boyceville. Doug was also a member of the Boyceville Fire Department for over 30 years and the American Legion. He retired from the Boyceville village public works in May 2014. He loved anything related to John Deere tractors. Doug and Sherrie liked to travel and Doug always enjoyed spending time with his family. Through the years, they were foster parents to many children. Douglas is survived by his wife, Sherrilyn (Boyceville), his three daughters; Julie (Paul) Behling, Lori (Dale) Behling, and Melissa (Ronald) Schultz all of Boyceville, eight grandchildren; Derrick, Ashley, Justin, Kimberly (Mitch), Brittany (Mike), Brandon, McKenzie and Tyler, one great grandchild Madison, one brother Dan (Joyce) Hellendrung, one sister Julie (Luke) Berglund, brothers-in-law; Butch (Sue) Hedlund, Paul (Donna) Hedlund, sisters-in-law; Sandy (Doug) Stevens, Karen Schlough, Tammie (Bill) Zarak, and God children; Tony Hellendrung, Jennifer Mortel, and Logan Berglund, foster granddaughter Jaslyn Krueger, as well as many other family and friends. He was preceded in death by his parents, Ken and Rose Hellendrung, infant siblings, and his father and mother in law, J.M. and Dorris Hedlund. In lieu of flowers, the family requests donations be made to St. Jude's. Memorial services will be held at 11:00 a.m. Saturday, February 6, 2016 at Trinity Lutheran Church in Boyceville with Pastor Brad Peterson officiating. Military honors will be provided by the Harmon-Harris American Legion Post 314. There will be visitation from 9:00 a.m. until the time of service at the church. Burial will take place at a later date at Northern Wisconsin Veterans Memorial Cemetery in Spooner.

Douglas J. Hellendrung, age 66, of Boyceville WI passed away at home surrounded by his loved ones Wednesday, February 3 after a battle with cancer. Douglas was born March 29, 1949 in Hennepin County, MN to Ken and Rose Hellendrung. He grew... View Obituary & Service Information

The family of Douglas James Hellendrung created this Life Tributes page to make it easy to share your memories.