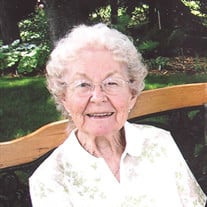 Dorothy Elenora Stougaard, age 96, of Colfax, died Saturday, November 5, 2016, at Comforts of Home in Menomonie where she lived for only three weeks. She was born November 30, 1919 in St. Paul, MN to John and Adelia (Dietz) Leitner. She attended school in St. Paul, graduating from Mechanic Arts High School in 1937. She married Dan Stougaard on June 8, 1940 in St. Paul. They were happily married for 71 years. She was a wonderful wife, mother, grandmother and great grandmother and served as a strong role model of healthy parenting and marriage for her children and grandchildren. She had a strong faith in the Lord, reading her Bible daily. Dorothy enjoyed birds, nature and gardening. In her later years, she donated flowers to plant the outdoor beds at Our Savior’s church. After Dan’s retirement, he and Dorothy became Florida residents for 23 years, spending six months of each year in Largo, FL and six months at Lake Edwards near Brainerd, MN. Dorothy is survived by two daughters, Marie Young of Colfax with whom she lived for the past five years and Marcia (Ken) Nelson of Duluth, MN: four grandchildren, Steve (Kathy) Young of Winona, MN, Lisa (Yann) Oehl of Seattle, WA, David (Josie) Nelson of Medicine Lake, MN and Grant (Elaine) Nelson of Duluth, MN; and nine great-grandchildren, Christine, Samuel, and Frances Young, Esme and Freya Oehl, Karl and Kajsa Nelson, Micah and Annalise Nelson. She was preceded in death by her parents, her husband, Dan a brother, John, sister, Myrtle and son-in-law, Karl W. Young. Memorial services will be held at 11 a.m. Saturday, November 19, 2016 at Our Savior’s Lutheran Church, Menomonie, with visitation starting at 10 a.m. at the church. Memorials may be made to Our Savior’s Lutheran Church, Menomonie or donor’s preference. Olson Funeral Home of Menomonie is assisting the family.

Dorothy Elenora Stougaard, age 96, of Colfax, died Saturday, November 5, 2016, at Comforts of Home in Menomonie where she lived for only three weeks. She was born November 30, 1919 in St. Paul, MN to John and Adelia (Dietz) Leitner. She attended... View Obituary & Service Information

The family of Dorothy E. Stougaard created this Life Tributes page to make it easy to share your memories.