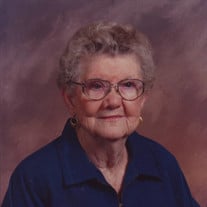 Dorothy M. Blakeley, age 99, of Menomonie, Wis., died Wednesday, December 2, 2015, at the home of her son, Brian. Dorothy was born March 7, 1916, in Menomonie, Wisconsin, to Otto and Theresa (Brightsman) Maves. She grew up on a farm in Cedar Falls and attended school there, graduating from the eighth grade in 1930. She later attended “Aggie High” in Menomonie. Dorothy married Layton E. Blakeley on September 2, 1939, in Menomonie. Following World War II, they made their home in Eau Claire, where Layton worked at Uniroyal. In 1968, they moved to Menomonie and then to a farm seven miles north of the city. There they operated the Black Bell Antique Shop and established a pulp and timber plantation. She moved in 1997 to a duplex on Douglas Street in North Menomonie where she resided until last year. In 2003 she wrote My Memories: Recollections of a Life in Progress. She spent the last year of her life living with her son, Brian, and daughter-in-law, Mary. She enjoyed reminiscing about the olden days in Cedar Falls, playing “500,” and watching Wheel of Fortune and Family Feud. She was a member of the United Methodist Church in Menomonie and a long-time leader of a women’s “circle.” She is survived by son, Brian (Mary) Blakeley of Boyceville, daughter, Mary Etta Blakeley of Eau Claire, three grandchildren, Derek (Amy Fleury) Blakeley of Lake Charles, LA, Alec (Elizabeth) Blakeley of Colorado Springs, CO, and Carter Ann (Robert) Foster of Sterling, VA; four great-grandchildren, Jordan (Ryan) Walker, Peyton Blakeley, Kyle Foster, and Aaron Foster; nieces and nephews and other friends and relatives. She was preceded in death by her parents, three brothers (Lavern, Lenard, and Arthur); two sisters (Leona Sherk and Edna Heeg), grandson’s wife, Lisa Blakeley, and great-grandson, Graham Layton Fleury Blakeley. Memorial services will be held at 11:00 a.m. Friday, Dec. 18, 2015 at United Methodist Church in Menomonie with Pastor Wendy Slaback officiating. There will be visitation at the church one hour prior to the service on Friday. Burial will be in St. Paul’s Lutheran Cemetery in the Town of Menomonie, Dunn Co. WI. In lieu of flowers, memorials may be made to the Dunn County Humane Society, the Menomonie United Methodist Church, the Menomonie Library, or the Stepping Stones Food Pantry.

Dorothy M. Blakeley, age 99, of Menomonie, Wis., died Wednesday, December 2, 2015, at the home of her son, Brian. Dorothy was born March 7, 1916, in Menomonie, Wisconsin, to Otto and Theresa (Brightsman) Maves. She grew up on a farm in Cedar... View Obituary & Service Information

The family of Dorothy Marie Blakeley created this Life Tributes page to make it easy to share your memories.