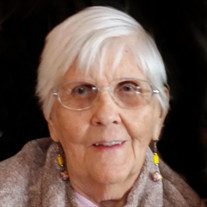 Doris Marion (Hilsen) Hasse of Blanchardville, WI, age 93, was welcomed home to Heaven by her loving Saviour Wednesday, Jan. 14, 2015 at the Glarner Lodge Assisted Living Facility in New Glarus, WI surrounded by family. Doris was born Nov. 11, 1921 in Colfax, WI to Ingeman and Valborg (Sundstrom) Hilsen and graduated from Eau Claire high school. She married Everett Carl Hasse on July 11, 1942. While they resided in Michigan their two oldest children were born and after moving to LaCrosse, WI, three more children were added to the family. Doris enjoyed both providing for her family at home as well as working at Howard Barge Chiropractic as a receptionist and Mulders Nursing Home as a medical secretary. She was an involved member of Temple Baptist Church in LaCrosse, WI serving as a mentor and Sunday School teacher. Doris was known by all as an ever willing hostess and friend. Her relationship with Christ as her Savior radiated through her to everyone she was near. It was also foundational in the love that she received from her family, her friends and acquaintances. Her family describes her as being an exemplary wife, mother and an example of God's grace to her family as well as her granddaughters, Esther and Noel, who lived with them for several years. Ask nearly anyone who knew Doris and they will probably mention her love for her Lord, love for her family, love for others and her loving smile. They might also mention her love for writing poetry and her love of Scrabble. She enjoyed sewing, baking, making Lefse, gardening, ladies Bible fellowships, teaching Sunday School, reading novels, crossword puzzles, helping others and being with family. Most of all she enjoyed reflecting Christ. Doris is survived by three daughters: Mary (Richard) Tracy of LaCrosse, WI; Deborah (Jerry) Crandell of Severance, CO; Sandra (Mark) Meisberger of Blanchardville, WI; one son, Daniel Hasse of Onalaska, WI and one son-in-law, Thomas (Bridie) Uhlenhopp of Waterloo, IA. She is also survived by: 10 grandchildren: Esther Uhlenhopp of Seoul, Korea; Noel Janda of Center Point, IA; Mark Tracy of LaCrosse, WI; Michelle Tracy of St Louis Park, MN; Jared (Ronda) Crandell of Byron Center, MI; Jami (Darren) Jaques of Severance, CO; Jeanna (Joshua) Snook of Chariton, IA; Matthew (Megan) Meisberger of Janesville, WI; SFC Joshua (Krysta) Meisberger of Apple Valley, MN; and Katelyn Meisberger (SGT Curtis Shotliff) of Mankato, MN and 16 great-grandchildren. Brothers and Sisters: Pat Ludwigson, Bloomer, WI; Ruth (Harold) Boese, Bloomer, WI; Jeanne (Urs) Meyer, of Solothurn, Switzerland and Nancy (Dan) Goller of Cornell, WI, as well as nieces and nephews and other relatives and friends. She was preceded in death by her parents; her beloved husband, Everett Hasse; daughter, Carol Hasse Uhlenhopp; brothers LaVerne Ludwigson, Harold Ludwigson and Norbert Ludwigson and sister Joan. Funeral services will be at 11:00 AM on Tuesday, Jan. 20, 2015 at Olson Funeral Home in Menomonie, WI with Dr. Leonard Saunders officiating. Burial will be in St. Paul's Lutheran Cemetery in Menomonie. Family and friends may visit at the funeral home from 10:00 AM on Tuesday until the time of the service. In honor of Doris's commitment to Christian missions, contributions in lieu of flowers may be made to WorldVenture Fund #4200176, 1501 West Mineral Ave, Littleton CO, 80120-5612. Her family would like to thank the staff at the Glarner Lodge as well as the Hospice caregivers for their tender and caring love they provided to Doris during her final days. They were a blessing from God.

The family of Doris Marion Hasse created this Life Tributes page to make it easy to share your memories.