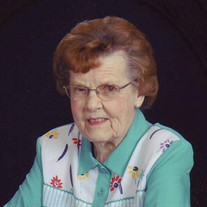 Doris V. Gibson, age 100, of Menomonie, WI passed away Sunday, Nov. 2, 2014 at American Lutheran Home in Menomonie. The former Doris Viola Litsheim was born April 29, 1914 in Kenyon, Minnesota to John and Christine (Strand) Litsheim. She went through eighth grade in Kenyon and then moved to Faribault, Minnesota and graduated from high school in 1932. Doris worked as a telephone operator for Northwestern Bell Company until she eloped with John Gibson on October 17, 1936. Because Doris couldn’t be married and continue to work for the phone company, they kept their marriage secret for a few months. Doris and John had three children, Joan, Jacquelyn and J. Craig. They traveled extensively due to John’s work, but did spend several years in Minneapolis where Doris worked at both Honeywell and Title Insurance Company, and in Menomonie, where they bought and ran the Town and Country Bar from 1963 to 1965. In 1977, John and Doris retired to Menomonie and joined Christ Lutheran Church. Doris found much solace over the years in the work of the church. She was dedicated to the Sunshine Group for 13 years, attended work days and helped put the church paper together until only recently. She was a devoted member of Christ Lutheran Church Women. Doris is survived by her children, Joan (Stanley) Labs, Jacquelyn (Marvin) Hillman and J. Craig (Marie) Gibson; her grandchildren, Sue (John) Parker, Brian (Michelle) Hillman, Sonia Labs, Beth (Troy) Hein, Joshua (Kim Heller) Gibson and Ann Gibson; her great-grandchildren, Dylan ad Katie Hein; Tommy, Cade, Will and Chase Parker; Marlie Gibson-Pittel; John Duncan and Wynne Gibson; and Paige and Brandon Hillman; and many, many other relatives. She was preceded in death by her mother and father; her husband John in 1988; one son-in-law William Styer; one daughter-in-law Winifred Gibson; one grandson Jon Labs; thirteen brothers and sisters, and many sisters-in-law, brothers-in-law, nieces and nephews. A Memorial Service will be held at 11:00 a.m. Saturday, Nov. 15, 2014 at Christ Lutheran Church in Menomonie with Pastor Geoff Scott officiating. Burial will be in Evergreen Cemetery in Menomonie. There will be visitation at the church one hour prior to the service on Nov. 15. Olson Funeral Home of Menomonie is serving the family.

The family of Doris V. Gibson created this Life Tributes page to make it easy to share your memories.