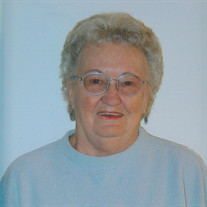 Doris E. Ford, age 89, of Menomonie, formerly of Knapp, passed away Friday, August 09, 2019 at The Neighbors of Dunn County in Menomonie. Doris was born September 10, 1929 in Menomonie, WI. She was the daughter of Wayne and Grace (Smith) Thibado. At the age of 11, she moved to Menomonie from Dunnville with her mother, sisters Carol and Eva Jean, and her grandmother Eva Smith. She graduated from Menomonie High School in 1947. She married Avery Ford on November 27, 1948. After marriage, they lived in the Menomonie area until moving to Knapp in 1954. Doris worked at Sanna Dairies as a Lab Technician from April 1951 until her retirement in April of 1991. Doris enjoyed being a part of her granddaughter’s and great grandchildren’s lives, even traveling to Minnesota, Utah and Texas to spend time with them. Doris enjoyed many years of dancing, bowling and camping. She was the “Knapp Taxi” for many years, taking her friends to Menomonie to do their errands and shopping. She enjoyed her Sunday rides after church for brunch, conversation and the discovery of new roads with her church friends. Doris is survived by her children Rick Ford and Karen (Frank) Bammert both of Menomonie; two granddaughters Lisa Bammert (husband Craig Wagner) of Utah and Jodi (Randy) Bammert-Mueller of Minnesota; great grandchildren Isabel (Austin), Isaiah, Alyssa, Hunter, Elena, Treyton and Zoey. She is also survived by sisters Carol Cuellar and Lynda Thibado (husband Don Briggs); brothers Wayne (Sue) Thibado, David (Cindy) Thibado and Ken Thibado, Sr.; sisters-in-law Marion Ford, Darlene Hintzman and Ardis Dunahee; as well as many nieces, nephews and cousins. She was preceded in death by her parents, husband Avery in 1992 and her sister Eva Jean in 1998. Memorial Services will be held at 11:00 a.m. Friday, August 16, 2019 at Olson Funeral Home in Menomonie with Pastor Tim Vettrus officiating. Burial will take place at Forest Hill Cemetery in the Town of Stanton, Dunn County. Visitation will be from 4:00 p.m. to 7:00 p.m. Thursday and also one hour prior to the service on Friday.

Doris E. Ford, age 89, of Menomonie, formerly of Knapp, passed away Friday, August 09, 2019 at The Neighbors of Dunn County in Menomonie. Doris was born September 10, 1929 in Menomonie, WI. She was the daughter of Wayne and Grace (Smith) Thibado.... View Obituary & Service Information

The family of Doris E. Ford created this Life Tributes page to make it easy to share your memories.