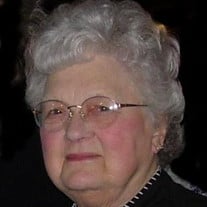 Donna M. Piersall Donna Marie Piersall went to join Arnold on January 19th, 2016, shortly after her 93rd birthday. Donna was born December 26, 1922 in Cedar Rapids, Iowa, the middle daughter of T. Hugo Frederick and Mary Novak Lindahl. She graduated from McKinley High School in Cedar Rapids in 1941 and married her high school sweetheart, Arnold Piersall, on Dec. 28, 1946. As Arnold pursued his teaching degrees in industrial arts and his subsequent career, they lived several places in Iowa, Missouri, Colorado, and Minnesota before settling in Menomonie, WI in 1960. In early 2015, Donna moved to Milestone Senior Living in Woodruff, WI. Donna and Arnold were active in Menomonie. Playing cards, attending Masonic and United Methodist Church functions and dancing to Conrad Johns’ dance band were some of the many activities they enjoyed. Donna studied to be a secretary/bookkeeper and worked for a time at Merchant’s National Bank and St. Paul’s Methodist Church in Cedar Rapids, IA. In 1975 she went to work in the UW-Stout Foundation / Alumni Office, retiring in 1983. Donna loved to travel. She and Arnold took 19 cruises and visited Donna’s relatives in Sweden several times. They made many trips in their RV, traveling much of the time with their good friends, Chuck and Ruth Thomas. Donna kept an immaculate home and enjoyed entertaining friends, sewing garments, knitting and shopping. She was a great cook. She celebrated her heritage through her wonderful Swedish Rye Bread and Bohemian Kolaches and enjoyed sharing them with friends and neighbors. She attributed her long life to her father Hugo’s genes! Donna is survived by daughters Joyce (Steve) Schwarz of Port Barrington, IL, Jean (Ed) Mejerle of Woodruff, WI, grandchildren, Megan (Les) Dickert of New York, NY, Bill Schwarz of Tacoma, WA, sister, Carolyn Moen, Marion, IA, and nephews, James Piersall and Gary Moen. Donna was preceded in death by Arnold (in 2010), her parents, sister, Evelyn Metcalf, brothers-in-law, Dean Metcalf, Burt Moen, Lloyd Piersall, Dale Piersall, sisters-in-law, Verda Snider, Loraine Piersall, Laura Piersall, and niece, Barbara Piersall. Funeral services will be held at 11:30 a.m. Wednesday, January 27, 2016 at the United Methodist Church in Menomonie with Pastor Wendy Slaback officiating. Burial will take place at Evergreen Cemetery in Menomonie. Visitation will be from 4:00 p.m. to 7:00 p.m. Tuesday at Olson Funeral Home in Menomonie and also one hour prior to the services at the church. Memorials can be made to Refuge Farm in Spring Valley, WI, Dunn County Animal Shelter, or the Arnold and Donna Piersall Industrial Education Scholarship fund at UW-Stout Foundation. “Perhaps they are not stars in the sky, but rather openings where our loved ones shine down to let us know they are happy”

The family of Donna M Piersall created this Life Tributes page to make it easy to share your memories.