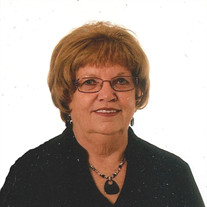 Donetta M. (Suckow) Knudson, 77 years old of Colfax passed away Saturday, August 15th surrounded by her loving family at Mayo Clinic Health System-Eau Claire. She fought a courageous battle against Pulmonary Fibrosis. She was born January 30, 1943 in Menomonie to Merlyn (Hoop) & Maybelle (Mittlestadt) Suckow. She was a 1961 graduate of Colfax High School. She married Stan Knudson on March 7, 1964. In 1964, she was employed by Univac in St. Paul MN as a factory worker until they moved back to Colfax in 1969. She then was employed by Solberg’s Clothing Store. In 1974, she began working in Menomonie at 3M until her retirement from there in 2004. In her early years, she was a Pitcher for the Colfax Messenger Softball team. Donetta was active in league bowling in Colfax and many tournaments. She also spent time with friends playing “500” and Dirty Clubs. Her hobbies included knitting, shopping, computer casino games and reading. She was a fun loving woman whether it was in her home or traveling with family. Donetta especially enjoyed “camping” with her grandsons. Family was so important to her. It was her grandchildren that brought her the greatest joy, spending hours in the bleachers watching their games and performances. Donetta will be dearly missed by her husband of 56 years, Stan; daughter, Jodi (Mike) Kiekhafer of Colfax; son, Jamie (Sarah) Knudson of Appleton; five grandchildren, Logan (Heather) Kiekhafer, Teren (Jadra) Kiekhafer of Colfax; Ethin (Isabelle Ferm) Kiekhafer of Big Rapids, MI; Braedon Knudson and Ava Knudson of Appleton; brother, Jon (Eve) Suckow of Colfax; brother-in-law, Robert Knudson of Eau Claire; sisters-in-law, Helen Renz and Pat Knudson of Colfax, Patsy Suckow of Eau Claire and Mary Samuelson of Hudson. She was recently blessed with great-grandchildren, Otto and Makenna. Donetta is also further survived by many beloved nieces, nephews, cousins and friends. She was preceded in death by her parents, brothers Duane Suckow and Denny Suckow; in-laws, Hogen and Olianna Knudson; brothers and sisters-in-law, Milton and Virginia Knudson, Kenneth and Arlene Knoepke, Layton Knudson, Dean Renz, Kenneth Knudson and Gordon Knudson. A memorial service to honor Donetta will be held Sunday, August 23rd at 1:30 pm at Whitetail Golf Course, Colfax WI. Following the service, please join the family to celebrate her life from 2:00-5:00. Burial will be at a later date. Olson Funeral Home & Cremation Services, Menomonie is serving the family.

The family of Donetta M. Knudson created this Life Tributes page to make it easy to share your memories.