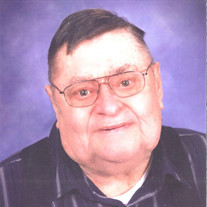 Donald Fredrick Wyss, age 79, of Boyceville, was called home to be with his Heavenly Father on Thursday, August 11, 2016. Donald was surrounded and comforted by his loving family, and the caring staff at The Neighbors of Dunn County. Donald was born July 25, 1937 on the home farm in the town of Stanton, Dunn County to Fredrick and Norma (Olson) Wyss. He graduated from Boyceville High School in 1955. On August 17, 1968 he married Jane Gutknecht at St. Paul’s Lutheran Church in Menomonie. He was a man of strong faith. Even in times of struggle, he would turn to his Lord and savior in prayer. Donald worked the family farm his entire life with passion; a passion for growing and sowing his crops. He was a very social person. He appreciated having conversations to discuss farming and looking at business practices that would make for success. His strong work ethic, combined with patience and compassion was passed onto his children and grandchildren. In his later years, Donald enjoyed overseeing the work, progress and changes to the family farm. Those who knew him best, knew his love for driving his truck, his dogs Max and Laddie, and knew how he enjoyed talking with anyone who shared his similar interests. Donald is survived by his loving wife Jane, children; Steven (Carol), Robert (Cindy), William (Stacey), Joseph, and Ella; grandchildren, Ashley (Talon), Andrew (Allison), Abby, Lauren, Hannah, Jack, Lucas, Beau, and Drake; 5 step-grandchildren; 5 step-great grandchildren; siblings, Donna Wyss, David (Pat) Wyss, Richard (Joan) Wyss, Rosalie Halverson, Ronald (Sharlene) Wyss, Debra (Dick) Erickson, Harlan, and Fredrick (Eleanor) Larson. He is further survived by many nieces, nephews, other relatives and friends. He was preceded in death by his parents and a nephew, Rob. Funeral services will be held at 11:00 a.m. Tuesday, August 16, 2016 at St. Paul’s Evangelical Lutheran Church in Menomonie with Pastor Brett Voigt officiating. Burial will take place in the church cemetery. There will be a visitation from 4:00 p.m. to 7:00 p.m. on Monday at Olson Funeral Home in Menomonie and also one hour prior to the service at the church on Tuesday.

Donald Fredrick Wyss, age 79, of Boyceville, was called home to be with his Heavenly Father on Thursday, August 11, 2016. Donald was surrounded and comforted by his loving family, and the caring staff at The Neighbors of Dunn County. Donald... View Obituary & Service Information

The family of Donald Wyss created this Life Tributes page to make it easy to share your memories.