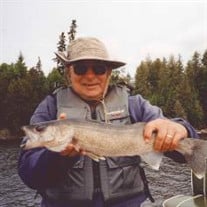 Donald Dean Wik, 80, of Downsville, died Wednesday, December 28, 2016 at the Neighbors of Dunn County in Menomonie, surrounded by his loving wife, his best friend and brother Robert, and his Pastor. Don was born on June 18, 1936 at Luther Hospital in Eau Claire, WI, to Genesse (Switzenberg) and Harold Wik. Don graduated from Menomonie High School in 1954. In 1953, he joined the Wisconsin National Guards and served for about 10 years. As a young man, Don was a champion street stock racer and was president of the Menomonie Racing Association. All of Don’s life, he was a hands-on guy dedicated to building and creating tools and machines that impacted industry nationally and internationally, as well as with the learning of students at UW-Stout in Menomonie, WI. During his work career, Don was employed at Honeywell, Inc., in Minneapolis, MN, in the engineering and development lab, as a technician. While there, he was part of the team that built the entrance door for John Glenn’s space capsule. Don owned his own machine shop business designing and making prototypes for various companies. During this time, Don designed and received a patent for invertebrate traps used by wetland biologists and pollution control researchers. Don enjoyed working at UW Stout for over 30 years, as a machinist in the lab with the engineering and manufacturing students and staff leading up to his retirement. During his retirement, Don enjoyed meeting his brother for lunch at various cafes around the county and driving through the Mondovi countryside of childhood years and reminiscing over their time farming on family farms, enjoying the scenery and discussing the crops. In recent years, Don delighted in playing dominoes and cards with Zita, Robert and many friends after dinner in the evenings. Don loved hunting and fishing with his children and teaching them outdoor survival skills. For many years, he loved traveling to Canada in the summer with family and friends, where they laughed, played cards and enjoyed sharing big fish stories. Don will be remembered by his family, neighbors and friends, for his big smile, and as a kind, humble, honest, and hardworking man. Don is survived by his wife, Zita, his brothers, Robert and Galen, his children: Nancy (Dean) Owens, Brenda Kothbauer, Jim (Donna) Wik, five grandchildren and eight great-grandchildren, along with numerous nieces and nephews. A Memorial service for Don will be held at 11:00 a.m. on Wednesday, January 4, 2017, at New Hope Lutheran Church in Downsville, WI with Pastor Dale Moe officiating. There will be visitation at the church one hour prior to the service. A lunch will follow in the church hall. Olson Funeral Home in Menomonie is serving the family.

Donald Dean Wik, 80, of Downsville, died Wednesday, December 28, 2016 at the Neighbors of Dunn County in Menomonie, surrounded by his loving wife, his best friend and brother Robert, and his Pastor. Don was born on June 18, 1936 at Luther... View Obituary & Service Information

The family of Donald D. Wik created this Life Tributes page to make it easy to share your memories.