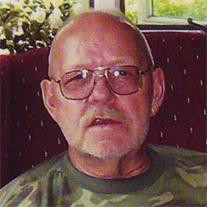 Donald Fred Clements, age 84, of Menomonie, passed away Monday, February 4, 2013 at his home surrounded by family under hospice care. Donald was born on August 12, 1928 to Fred and Mabel (Timm) Clements in Spring Valley, Wisconsin, where he also attended school. Don married Jerene Oberle on October 1, 1949 at Our Savior's Lutheran Church in Menomonie. Don played in Fred's Old Time Orchestra as a drummer for many years which is how he and Jerene met. He worked at Sanna Dairies for 37 years as a butter maker and also in the maintenance department. He retired from there in 1987. Don was considered a Mr. Fix-it. He always had the need to keep busy and couldn't sit still which often led him to his many frequent trips to Fleet Farm. So many, that some people may have thought he worked there. Don's true passion was for the outdoors. He enjoyed many great times on hunting and fishing trips with "the boys". On one specific fishing trip in Florida, he caught a small hammerhead shark. He also enjoyed camping, playing cards, cribbage and horseshoes. Don treasured his entire family and found many ways to create long lasting memories, whether it was with his children, his grandchildren and also his great grandchildren, he was always a kid at heart. He will be sadly missed by all. Don is survived by his wife Jerene of 63 years Children; Steve (Yvonne) Clements of Eau Claire, Doug (Sherry) Clements of Chetek, Jenelle (Gene) Gove of Wausau, Shelly Clements of Menomonie and Cory (Janet) Clements of Menomonie 15 grandchildren 11 great grandchildren A sister, Joan Buss and a brother James (Joan) Clements As well as many other relatives and friends He was preceded in death by his parents, Fred and Mabel Funeral services will be at 2:00 p.m. Friday, February 8, 2013 at Our Savior's Lutheran Church in Menomonie with Pastor Heather Wigdahl officiating. Visitation will be from 12:00 noon until 2:00 p.m. Friday at the church. Burial will take place in the spring in Mamre Cemetery, Twp. Dunn, Dunn Co. WI.

Donald Fred Clements, age 84, of Menomonie, passed away Monday, February 4, 2013 at his home surrounded by family under hospice care. Donald was born on August 12, 1928 to Fred and Mabel (Timm) Clements in Spring Valley, Wisconsin, where he... View Obituary & Service Information

The family of Donald Clements Obituary created this Life Tributes page to make it easy to share your memories.