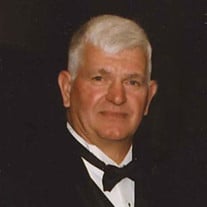 Donald Lee McWithey, age 72, of Ridgeland passed away peacefully on Sunday, June 19, 2016 at Lakeview Medical Center in Rice Lake, surrounded by his family after a three-year battle with cancer. Donald was born on August 18, 1943 to Malcolm and Edna (Stevens) McWithey in the township of Hay River, Dunn County. He graduated from Prairie Farm High School in 1961. On August 3, 1974, Don married Jacklyn Schleusner at St Paul’s Lutheran Church in the township of Prairie Farm, Barron County. He grew up on the family farm which later became his family farm. In October 2001 he sold the dairy cows but continued to farm the land. He had worked several different jobs with his last and most recent which was road patrolman for the township of Sheridan. He took pride in all duties and serving the residences within the township. Because of health reasons he retired in October 2015. Don enjoyed starting his day having breakfast with the guys, shaking dice to see who buys and shooting the breeze. He always kept busy even after a full day of work. There was always time for a game of cribbage or pinochle, and depending upon the season, a round of golf or hooking onto the boat to go fishing. Don also played dartball for many years, frequented tractor pulls and had recently became a member of the Prairie Farm Lion’s Club. He was more than willing to lend a helping hand to all who needed it, even if it meant putting his work aside. Nothing meant more to him than his family. He loved having his children come home for visits and his real pride and joy was spending time with his grandchildren. Don is survived by his three children Stephen (Angela) of Menomonie WI, Brent (Patrick Harrington) of Minneapolis MN, Kari of Bloomington MN; grandchildren, Samuel, Sidney, Jacob McWithey; sisters, Rosemary, Sandra, Wendy McWithey, Julie (Jerry) Hiben; and dear friend Judy Edstrom. He is further survived by many nieces, nephews, cousins, other relatives and friends. He was preceded in death by his parents, wife Jacklyn, brother Stephen, nephew Daniel Hiben and his father-in-law and mother-in-law Raymond and Elsie Schleusner. Funeral services will be held at 11:00 a.m. Thursday, June 23, 2016 at the Ridgeland Area Community Center with Pastor Tim Vettrus officiating. Burial will take place at St. Paul’s Lutheran Cemetery, Twp. Prairie Farm, Barron Co. Visitation will be from 4:00 to 7:00 p.m. Wednesday at Olson Funeral Home in Menomonie and also one hour prior to the service on Thursday at the Community Center.

Donald Lee McWithey, age 72, of Ridgeland passed away peacefully on Sunday, June 19, 2016 at Lakeview Medical Center in Rice Lake, surrounded by his family after a three-year battle with cancer. Donald was born on August 18, 1943 to Malcolm... View Obituary & Service Information

The family of Donald Lee McWithey created this Life Tributes page to make it easy to share your memories.