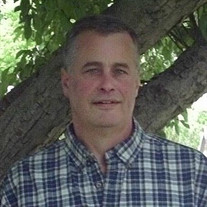 Donald Edward Luepke, 57, of rural Menomonie, died unexpectedly on Friday, June 2nd. He was born on August 10, 1959 at Myrtle Werth Medical Center in Menomonie to Clarence and Geraldine Luepke. Don grew up in Glenwood City, WI, graduating from Glenwood City High School in 1977. He learned many valuable carpentry skills from his dad, working alongside his dad and brother at Luepke & Son’s in Downing, WI for many years. Don was currently employed at Nestle in Eau Claire. Don married Patty Butler on March 9, 1985. Together they had three children; Nichole, Trevor and Clare. Don had a quick wit and was always playfully teasing his family and friends. He loved to go deer hunting at the cabin he helped build with his dad, brothers, and nephews. Don also loved to cook and frequently brought his famous baked beans to family picnics and reunions. He will be greatly missed by his family and friends. Don is survived by his wife Patty, his daughter Nichole (Kevin) Mayer and two grandsons, Isaac and Jonah Mayer, his son Trevor, and his daughter Clare. He is also survived by his mother, Geraldine of Glenwood City, his brother Steve of Glenwood City, his sister Sue (Alan) Berg of Viroqua, his brother Jim (Lori) of Glenwood City, and his brother Rick of Fort Worth, Texas. He is also survived by many nieces, nephews and friends. Don was preceded in death by his father, Clarence. A visitation will be held Tuesday, June 6th, from 4-7 PM at Olson Funeral Home in Menomonie with a memorial service at 7 PM with Pastor Doug Stolhand officiating. Blessed be his memory.

The family of Donald E. Luepke created this Life Tributes page to make it easy to share your memories.