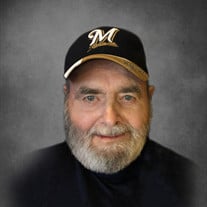 Donald Lee Herman, age 87, passed away peacefully on September 30, 2019, at Colfax Health and Rehabilitation Center, surrounded by his loving family. Donald lived many years with Parkinson’s. He was born October 24, 1931 in Chicago, IL.to Michael and Marie (Brezina) Herman. Donald’s younger years were spent in Chicago living with his parents and sister Barbara. At age 7, due to his father’s illness, Don moved to the family farm in Boyceville, where he was raised by his Grandma Eva and several aunts and uncles. He enjoyed the country life helping Grandma with chores and learning valuable lessons from his uncles. Don graduated from Boyceville High School in 1949. He was a member of the first Bulldog football team. The coach took the team to Eau Claire to watch another team, to learn the game and was heard saying “That’s how you play the game!” Don was also class president. After high school, he worked at Keyes Chevrolette. In 1953 Donald was drafted into the U.S. Army and was stationed in Berlin Germany as an M.P. Once home, he worked at Boyceville Creamery, and later started farming on the family farm. In 1957, while dancing at the 400 Club, he met the love of his life, Rayola Jane Salaway. They were married on August 2nd, 1958, at Our Savior’s Lutheran Church in Menomonie. Over 61 years of marriage they were blessed with four daughters, eight grandchildren, and eight great grandchildren. Don had a very full life, traveling to Alaska with his bride, running the farm with all his daughters, helping out with 4-H, serving on the church council, and REA board. Don enjoyed his last 20 years of employment working at Cady Cheese Sports was a big part of his life. He coached, watched the girls, grand kids, and great grand kids playing every sport from tennis, volleyball, hockey, and football. He will always be a “Menomonie Football” fan! He also loved the Green Bay Packers, and the Milwaukee Brewers. The family would like to thank each and every staff member at the Colfax Health and Rehab for the excellent care, support, and comfort they provided to the family. Heartland Hospice was also a welcoming comfort for Don and his family. We are so blessed. Donald is survived by his wife Rayola; daughters, Lori (Joe) Shervey, Heidi (Michael) Olson, Kari (Terry) Sand, and Darci (John/Jute) Fredrickson; grandchildren, Nicole (Winston) Nelson, Ashley (Trevor) Cady, Nicholas Olson, Jacqueline Olson (Corey Bergevin), Megan (Corey) Steinkraus, Jake Shervey (fiance Michelle Friedel), Benjamin (Haily) Sand, and Allison (Andrew) Wyss; great grandchildren, Ella, Gabrielle, Mackenzie, Corbin, Sadie, Olivia, Ryelin, and Cooper; sister Barbara Herman; sisters and brothers-in-law, Nancy and Gary Schroeder, and Pam and Mel Klaustmeier. He is also survived by many, cousins, nieces, nephews, other relatives and friends. He will be truly missed. Donald was preceded in death by his parents; In-laws, Lorraine and Bob Hamann; infant great grandson Finley Oliver Cady. A Memorial service will be held 2:00 p.m. Monday, October 7, 2019 at Christ Lutheran Church, in Menomonie, WI with Pastor Randy Skow-Anderson officiating. There will be visitation from 12:30 to 2:00 p.m. Monday at the church. Burial with military honors by Menomonie Veterans Honor Guard will be at Christ Lutheran Halvorson Cemetery. Olson Funeral Home in Menomonie is serving the family.

The family of Donald Lee Herman created this Life Tributes page to make it easy to share your memories.