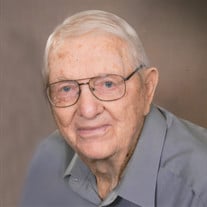 Donald P. Eiseth, age 89, of Menomonie, WI passed away Monday, Feb. 4, 2019 at The Neighbors of Dunn County. He was born August 30, 1929 with the help of a midwife, in the family farm house, in the Town of Menomonie, Dunn Co. WI to Arthur and Evelyn (Stokke) Eiseth. Don was baptized and confirmed at Christ Lutheran Church in North Menomonie. He attended North Menomonie grade school for two years, then completed grade school at Hudson Road School on Hwy. 29. He graduated from Menomonie High School in 1946 at age 16, where he played basketball and baseball. He then attended Stout Institute one year. In 1947, he took a summer job at Dunn County Electric, working there until drafted in March 1951, during the Korean War where he was stationed in Germany. He was discharged in March 1953. In 1948, he met his future wife, Arlene Frank, at the 400 Club. They were married on June 24, 1953. To this union they had three children; Rodney, Karen and Lori. After residing in South Menomonie, they moved to Route 1 Menomonie, a quarter mile from where he was born. He worked at Dunn County Electric for 46 years, starting as a common laborer, advanced to Lineman, Foreman and then Line Superintendent. He retired in 1993, after 46 years with D.E.C. Don was very active in Peace Lutheran Church for 25 years and then in 1978 they joined Christ Lutheran Church. During his time at church, he served four terms on the council and helped as needed doing volunteer work and maintenance at both churches. He sang in the church choirs for a total of 56 years, until 2009. Throughout his life Don enjoyed many things including bowling, horseshoes, softball, dart ball, golf, fishing, traveling, telling wonderful jokes, and most importantly spending time with family. Don is survived by two daughters, Karen (Everett) Freeland and Lori (Mark) Karnick; daughter-in-law Julie Eiseth; grandchildren, Taliah Eiseth, Haley (Mitchell) Booth, Jennifer (Emery) Holmstadt, Matthew (Olivia) Freeland, Kyle and Cory Karnick; great-grandchildren, Graham Eiseth, Oakley Booth, Eli, Lily and Violet Holmstadt, Ava and Emma Freeland; brother, Francis (Violet) Eiseth. He is also survived by extended family and friends. He was preceded in death by his parents; his wife Arlene; his son Rodney; Brother Lloyd, sisters Betty Gesche and Lois Peterson. Memorial Services will be held at 11:00 a.m. Monday, February 11, 2019 at Christ Lutheran Church in Menomonie with Pastor Randy Skow-Anderson officiating. Burial will be at Christ Lutheran Halvorson Cemetery with military honors by the Menomonie Veterans Honor Guard. Visitation will be from 4:00 p.m. to 7:00 p.m. on Sunday at Olson Funeral Home in Menomonie and also one hour prior to the service at the church.

Donald P. Eiseth, age 89, of Menomonie, WI passed away Monday, Feb. 4, 2019 at The Neighbors of Dunn County. He was born August 30, 1929 with the help of a midwife, in the family farm house, in the Town of Menomonie, Dunn Co. WI to Arthur and... View Obituary & Service Information

The family of Donald P. Eiseth created this Life Tributes page to make it easy to share your memories.