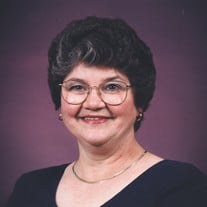 Dona Mae Zavada Andrews, age 77, of Wheeler, died Saturday, May 20, 2017 at The Neighbors of Dunn County in Menomonie. Dona was born on January 17, 1940 to Peter and Pearl (Kincade) Zavada in Rusk Prairie, Dunn County. She graduated from Santa Clara High School in California. After high school she married Stanley Andrews in California and then returned to Wisconsin. She worked for Parker Pen Company in Menomonie until she and Stanley began raising a family. She continued to work outside of the home. She worked for the Kernel, Doug & Mary’s (now known as Jake’s), Log Inn and Muza Law Firm. The family owned and operated the Northwind Inn in Wheeler. After selling, she worked numerous part time jobs. One of her favorite jobs was serving as secretary at Our Savior’s Lutheran Church in Wheeler. She found great reward and much appreciation due to her devoted commitment to the church and the community. She was also a part of the Ladies Aid and 4-H for many years. Dona enjoyed sewing, cooking and baking. She made sure there was plenty to eat and there was always an open invitation to all relatives and friends. Dona is survived by her children Bryan (Julie Wolf), Dawn (Pat) McDonald, Deanna (Ron) Steinberger, Heather (Chris) Ackerman; grandchildren Sydney Blaeser, Monica Blaeser, Amber (Mike) Carlsrud, Jason (Ashley) McDonald, Christopher (Michele) Steinberger, Stephanie Steinberger, Alycia (Jeff) Schwartz, Savanah Fischer, Tiana Fischer Mikaela Fischer; great grandchildren Finn, Sven and Nels Carlsrud, Beau and Araya McDonald; brother Paul (Kate) Zavada, sister Susan (Don) Knaack, sisters-in-law Mary Zavada and Sherry Zavada. She is further survived by many nieces, nephews, other relatives and friends. She was preceded in death by her parents, brothers Jerry Zavada, Dennis Zavada and former husband Stanley. Memorial Services will be held at 10:00 a.m. Friday, May 26, 2017 at Our Savior’s Lutheran Church in Wheeler with Pastor Ron Burke officiating. Burial will take place at Our Savior’s Lutheran Cemetery, Twp. Hay River, Dunn County. Visitation will be from 4:00 p.m. to 7:00 p.m. Thursday at Olson Funeral Home in Menomonie and also one hour prior to the service at the church. Memorials are suggested in Dona’s memory to Our Saviors Lutheran Church in Wheeler or the American Cancer Society.

Dona Mae Zavada Andrews, age 77, of Wheeler, died Saturday, May 20, 2017 at The Neighbors of Dunn County in Menomonie. Dona was born on January 17, 1940 to Peter and Pearl (Kincade) Zavada in Rusk Prairie, Dunn County. She graduated from Santa... View Obituary & Service Information

The family of Dona M. Andrews created this Life Tributes page to make it easy to share your memories.