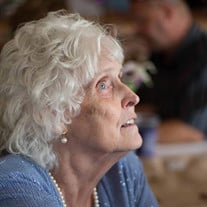 Dianne Marie Bias, 71, of Menomonie, WI, and formerly of Winona, MN, was taken from her loved ones suddenly and unexpectedly Tuesday, March 6, 2018. She was born on May 17, 1946, in Winona, MN, to Roy and Bernice McElmury. She graduated from Winona High School in 1964 and worked at various companies around the Winona area, retiring from the State of Minnesota several years ago. In retirement, Dianne and Herb enjoyed spending winters in the warm Florida sun until a few years ago when they decided to move permanently to Menomonie to be closer to their very large and ever expanding family. She enjoyed spending time with family and friends (baking, cooking and caregiving), crocheting many gifts for her loved ones, gardening, shopping for treasures, feeding and watching the birds in her backyard and, of course, pampering her much loved cats. Dianne especially loved watching her grandchildren in school and sporting events. She was a fierce caregiver to any person or creature in need. Her love was absolute and knew no bounds; she was like a mother and grandmother to many who came into her life. Compassionate, loving, and generous beyond compare, Dianne made a significant impact in the hearts and lives of those too numerous to count. Life will never be the same without Dianne here, but she leaves behind a timeless legacy that her loved ones will proudly carry on in her footsteps. Dianne is survived by her husband, Herb; daughter, Karen (Chuck) Anderson of Lake City; daughter, Penny (John) Kelly of Northfield; son, Steven (Joy) Glende of Red Wing; step-son, Steven ((Donna Engle (Madesen Voegele, Darian Engle, Trey Gamble)) Bias of Faribault; step-daughter, Samantha (Jason) Wimmer of Lake Elmo; grandchildren, Toni (Jamie) Adams, Cyndi Anderson, Elizabeth Anderson, Anne Anderson, Jack Kelly, Peter Kelly, Brandon Plank, Donna Handshaw, Christopher Glende, Duane Glende, Marion Glende, Hailey Bias, Maddy Wimmer, Alex Wimmer and Adam Wimmer; great-grandchildren, Greyson Adams and Hailey Plank; brother, John (Sue) McElmury of Lake City; sister, Beverly Wolfe of Winona; brother, Richard (Karen) McElmury of Winona; sister in-law, Brenda (Luke) Colburn of Deland, FL; brother in-law, Phillip (Patsy) Bias of Welch, WV; many nieces, nephews, wonderful friends and her beloved cats, Misty, Tiny, and Nikko. She was preceded in death by her parents, Roy and Bernice McElmury; infant brother, William McElmury; brothers-in-law, Donald Wolfe and Chester Ray Bias. A Time of Remembrance will be held from 1:00 – 4:00 pm, Tuesday, March 13 at Olson Funeral Home in Menomonie, WI.

Dianne Marie Bias, 71, of Menomonie, WI, and formerly of Winona, MN, was taken from her loved ones suddenly and unexpectedly Tuesday, March 6, 2018. She was born on May 17, 1946, in Winona, MN, to Roy and Bernice McElmury. She graduated from... View Obituary & Service Information

The family of Dianne M. Bias created this Life Tributes page to make it easy to share your memories.

Dianne Marie Bias, 71, of Menomonie, WI, and formerly of Winona,...