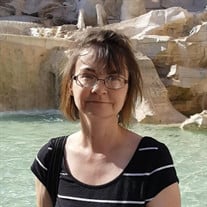 Diane M. Majors, age 54, of Knapp, WI passed away unexpectedly Sunday, May 16, 2021. She was born March 15, 1967 in Ottawa, IL to Earl Glover and Dorothy (Steinhouse) Glover. She grew up in Norway, IL and graduated from Serena High school in 1985. She graduated from Western Illinois University in 1989 with a bachelor’s degree in Business and Accounting. Diane met Kalon Majors when they worked at Wendy’s and got married on May 5, 1990 at St. Columbus Church in Ottawa Illinois. They have five children. She enjoyed spending time with family, doing Sudoku’s and crosswords, and loved to go to thrift stores and garage sales to get bargains for everyone. she loved her dogs and dressing them up. Diane worked many places over the years. When living in Rochelle, IL she worked at both Ace Hardware and as a librarian. She also worked at 3M in Menomonie, WI and while residing in Prairie du Chien WI, she worked at Prairie Industries and 3M. Diane also was a stay-at-home mother while living in Woodbury MN and then moved to Knapp, WI where she worked at Walgreens in Menomonie WI. One thing is for sure, Diane was a hard worker. Diane is survived by her husband Kalon of Knapp WI, three daughters and two sons, Patricia Majors of Hardy AR, Margaret (Nate) Walker of Eau Claire WI, Amanda Majors of Menomonie WI, Alan Majors of Knapp WI. Jared Majors of Knapp WI. Four grandchildren, Marcus and Niko Walker, Chloe and Jayden Majors. Five Sisters, Carol (John) Visocky, Mary Hales, Betty Glover, Sharon (Jerry) Doerksen, Kathy McMaster. Two brothers, Gerald Glover and Dale (Cathy) Glover. As well as many nieces and nephews. She was proceeded in death by her parents, Earl and Dorothy Glover, and several special family pets. The celebration of life for Diane will be Aug 15, 2021, at 11:30 a.m. Irving Park main shelter, Chippewa Falls WI all friends and family are invited to help celebrate.

Diane M. Majors, age 54, of Knapp, WI passed away unexpectedly Sunday, May 16, 2021. She was born March 15, 1967 in Ottawa, IL to Earl Glover and Dorothy (Steinhouse) Glover. She grew up in Norway, IL and graduated from Serena High school in... View Obituary & Service Information

The family of Diane M. Majors created this Life Tributes page to make it easy to share your memories.