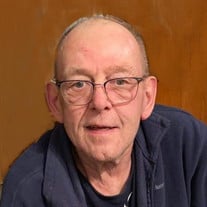 Dennis E. Schlueter, age 78, of Menomonie, WI passed away Friday, Dec. 31, 2021, at his home, with family by his side. He was born July 10, 1943, in Merrill, WI to Earl and Lucille (Gremler) Schlueter. He was raised in Merrill, attended St. John’s Lutheran Grade School and graduated from Merrill High School in 1962. Dennis served in the U.S. Navy from 1962 until 1966 as a fire fighter on the USS Newport News. On Dec. 5, 1970, Dennis married Kathleen “Cooky” Luedtke at Trinity Lutheran Church in Merrill, with Cooky’s uncle officiating. Dennis worked at the Clark Station in Wausau for several years, before becoming a franchise owner of the Clark Station in Menomonie. He then worked as custodian at St. Paul’s Lutheran Church and School. He also worked at Cady Cheese in Spring Valley until retiring. Dennis was a member of St. Paul’s Lutheran Church and V.F.W. Post 1039. He enjoyed hunting, fishing, snowmobiling, stock car racing and camping, especially with the Pioneers from church. He was a fan of the Packers, Brewers, and both the Badgers football and basketball teams. He also loved spending time with his family. Dennis is survived by his wife Cooky of Menomonie; his children, Joel Schlueter of Menomonie and Jennifer (Edward) James Sr. of Germany; and his grandchildren, Edward Jr. and Brittany James. He is also survived by two sisters-in-law, Sue Schanley and Judy Schlueter as well as nieces, nephews, other relatives and friends. He was preceded in death by his parents, Earl and Lucille; a brother Jim Schlueter; two brothers-in-law, Bill Luedtke and Mike Schanley; his mother and father-in-law, Bernice and Delbert Luedtke; and his grandparents. Dennis’s family would like to thank St. Croix Hospice for the compassionate care they gave Dennis. Funeral services will be held at 11:00 a.m. Saturday, Jan. 8, 2022, at Olson Funeral Home in Menomonie, WI. There will be visitation at the funeral home one hour prior to the service. Burial will be in St. Paul’s Lutheran Cemetery in the Town of Menomonie, Dunn Co. WI with military honors by Menomonie Veterans Honor Guard.

The family of Dennis E Schlueter created this Life Tributes page to make it easy to share your memories.