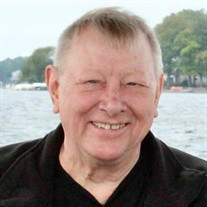 Dennis F. Oeltjenbruns, 77, passed away on March 2, 2021, at MCHS-Red Cedar in Menomonie, WI with his family by his side. Dennis was born in 1943 to Gerhard and Olga Oeltjenbruns in Mountain Lake, MN, where he grew up and graduated from high school. On June 6, 1964, he married his high school sweetheart, Avis. Together, they lived and worked on the family farm and he also worked at Land O’ Lakes. While in Mt. Lake, they had two daughters, Stacey and Tracey. In 1977, the Oeltjenbruns’ moved to Nisswa, MN, where they owned and operated Oeltjenbruns Service. In 1981, they had a son, DJ. In 2001, they moved to Bloomington, MN, and Dennis was the Maintenance Technician at Poplar Bridge Apartments. Dennis retired in 2016 and they moved to Menomonie, WI, to be closer to family. Dennis was the ever-faithful caretaker to Avis, his wife of 55 years, during her journey with Parkinson’s until she passed away in March 2020. Dennis had an unwavering dedication to God and his family. He found special joy in sharing time with his grandchildren, playing, talking, reading with, listening to, and supporting them in any endeavor. Dennis was the gentlest soul you’d ever want to meet, had a strong work ethic, was always kinder than necessary, loved to laugh and would help anybody who needed it. If you needed a smile, he had one to give; if you needed a hug, he had one of those too; if you needed to laugh, he would surely chuckle with you. Dennis was an avid card player and enjoyed playing with the people at Village at White Pine. There he learned his favorite game, Rummikub, and would play with anybody who would take him on. Dennis also enjoyed sudoku, fishing, watching sports, researching the stock market, golfing, and was always tinkering with something mechanical or trying to figure out a way to make something work better. His children, Stacey (Steve) Siegle of Menomonie, WI, Tracey (Eric) Sorenson of Menomonie, WI, and DJ (Kristen) Oeltjenbruns of Minnetonka, MN were beyond blessed to call him father. He was a beloved grandfather to: McKinley Siegle, Madeline and Isabelle Sorenson, Liv, Lars, and Metta Oeltjenbruns. He is also survived by brother Walter (Margaretta) Oeltjenbruns, sister Loretta (Jack) Carter, in-laws Sharon (Dennis) Nordby, Carl (Becky) Meyers, Rodney (Judy) Meyers, Lorraine Oeltjenbruns, and many nieces, nephews, and dear friends. Dennis was preceded in death by Avis, his parents, and siblings Arnold, Richard (Lois), and Leroy (Evaline). The family is forever grateful to Trisha Hagene-Nilsen, Pastor Heather Wigdahl, Amy Whelan, the wonderful emergency room staff at Mayo Menomonie and all of Dennis’ wonderful neighbors at Village at White Pine for caring for him with so much compassion and kindness. A Celebration of Life to honor both Dennis and Avis will be held at 11:00 am Saturday, June 12, 2021 at Our Savior’s Lutheran Church in Menomonie followed by a luncheon. Visitation will be one hour prior to the service at the church. In the meantime, a video tribute is available to view under the photos and videos tab at olsonfuneral.com

Dennis F. Oeltjenbruns, 77, passed away on March 2, 2021, at MCHS-Red Cedar in Menomonie, WI with his family by his side. Dennis was born in 1943 to Gerhard and Olga Oeltjenbruns in Mountain Lake, MN, where he grew up and graduated from high... View Obituary & Service Information

The family of Dennis F. Oeltjenbruns created this Life Tributes page to make it easy to share your memories.