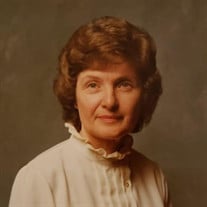 Delores D. Pauly, age 95, of Menomonie, Wisconsin, passed away peacefully on Saturday, December 19, 2020. Delores was born January 30, l925, in Minneapolis, Minnesota to Hans Jensen and Elna (Thompsen) Jensen. When in the fifth grade she moved to Aalborg, Denmark with her mother and sisters where she finished grade school and graduated high school. Upon graduation she worked as a maid until 1941. Due to the German Occupation of Denmark in WWII, her mother and step-father sent her and three sisters to the United States in an exchange program for German students. Delores married Fred W. Pauly of Menomonie on March 28, 1945. They had six children. Much of their life was spent on the family farm on Meadow Hill Drive in Menomonie. Delores was an avid gardener and cared for a small orchard on the farm. She and Fred were active parents, supporting their children in the Sunset Valley 4-H Club. They were also very active members in the Menomonie Saddle Club. Delores was also a member of the VFW Auxiliary. Delores was a longtime member of the First Congregational Church. Delores was a creative person whose many interests and talents included sewing, embroidery, knitting, crocheting, stained glass work, and quilting. Each grandchild was given a special quilt made by Grandma. Delores is survived by daughter, Kathy Mikesell, son Scott Pauly, both of Menomonie, son Rick (Joan) Pauly of Midlothian, Virginia, and son-in-law Lyn Wendt of Menomonie. She is also survived by grandchildren; Angela Murray, Jody (Tony) Lemke, Lori (Ryan) Olson, Jeremy (Sarah) Wendt, Ryan Pauly, Brett Pauly, Jesse (Kerrie) Pauly, and Sarah Pauly; and many great-grandchildren. Delores is preceded in death by her husband Fred, her parents, daughter Geri Wendt, son Kevin Pauly, son Jay Pauly and four sisters, Lucille, Ruth, Irene, and Joan. A private family memorial service will be held at 5:00 p.m. on Wednesday, January 20, 2021 at Olson Funeral Home in Menomonie, WI with Pastor Kathleen Remund officiating. The service will be live streamed to Olson Funeral Home’s Facebook page at www.facebook.com/OlsonFunerals

The family of Delores D. Pauly created this Life Tributes page to make it easy to share your memories.