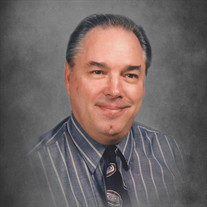 Del Vollrath, age 78, of Menomonie passed away Monday, January 25, 2021 after a short stay at “The Neighbors” of Dunn County. He was born November 2, 1942 in Kankakee, IL to Delmar E. Vollrath and Phyllis (Noble). He grew up in Monee, IL and graduated from Crete-Monee High School in 1960. He attended the University of Eastern Illinois where he was a member of Alpha Kappa Lambda fraternity, and graduated with a Master’s degree in music education in 1965. While attending university, Del married his high school sweetheart Mildred (Mickey) Usrey. They began a family that included two children. Upon graduation, Del and his family moved to Beecher, IL where Del taught at the local high school. Del also taught at Thorton Fractional North High School in Calumet City, IL. Del moved his family to Menomonie, WI in August of 1971 where he was a music instructor within the Menomonie School District until his retirement in 1998. Del was a marching band enthusiast and while high school band director, he took the marching band to a marching band competition in Rapid City, South Dakota. Del began the elementary band program within the Menomonie School District in the 1972-73 school year. Del was a former member of the Moose Club and Dunn County Fish and Game Club. He was an outdoor and shooting enthusiast who really enjoyed his time fishing, hunting, and camping. In 2005, Del lost his high school sweetheart, and wife, Mickey, to pancreatic cancer. Shortly thereafter, he met his special friend and partner to the end, Beth Jacobs. Del and Beth were able to take several trips together to various parts of the country. He really enjoyed that. Del is survived by: Beth, a son Mike (Linda) of North Freedom, WI, and a daughter, Michelle (Bronwyn) of Madison, WI. He is also survived by cousins, nieces, and nephews, and friends. He was preceded in death by his wife Mickey, parents Delmar and Phyllis, and his sister, Taye. A small private family burial will take place later this year at Cedar Falls Cemetery. Olson Funeral Home in Menomonie is serving the family.

The family of Delmar T. Vollrath created this Life Tributes page to make it easy to share your memories.