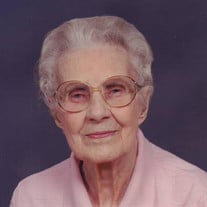 Della M. Kaiser, age 97, of Elk Mound, WI passed away Monday, January 19, 2015 at Colfax Health and Rehabilitation Center. The former Della Mae Allen was born Nov. 13, 1917 in Winter, WI the daughter of William and Mae (Harshman) Allen. She attended several country grade schools in Dunn County graduating in 1935. Della spent the war years working in Milwaukee. She married Carl A. Kaiser of Ridgeland, WI on Oct. 26, 1944. They farmed for several years, but Carl suffered from heart problems, so Della got a job at Luther Hospital in Eau Claire, where she worked for 25 years. After Carl’s death and retirement, Della spent several years as a housekeeper and companion for people in the area. Della is survived by two daughters, Rachel (Karl) Stillman of Bloomer and Wanda (Larry) Edwards of Colfax; daughter-in-law, Diane Kaiser of Elk Mound; sister, Ethel Cass of Menomonie; three sisters-in-law, Carrie Kaiser of Rice Lake, Donna Hom of Menomonie and Anne Allen of Texas; six grandchildren; 14 great-grandchildren; many nieces, nephews and cousins. She was preceded in death by her parents, her husband, Carl; beloved son, Dennis; three sisters and five brothers. Della was a member of Trinity United Methodist Church in Elk Mound, Ruth Circle and Red Hat Ladies. She will be sadly missed by her family and people who called her friend. The family would like to thank the caring staff at Colfax Health and Rehab., especially those who worked on Cedar Lane, also Hospice of St. Croix who helped them through the difficult times. Funeral services will be held at 11:00 a.m. Saturday, Jan. 24, 2015 at Trinity United Methodist Church in Elk Mound, with Pastor Margaret DeMaris officiating. There will be visitation from 4:00 to 7:00 p.m. Friday at Olson Funeral Home in Menomonie and at the church one hour prior to the service on Saturday. Burial will be in Waneka Cemetery in the Town of Spring Brook, Dunn Co. WI. Memorials are suggested to Trinity United Methodist Church or the Activity Dept. at Colfax Health and Rehabilitation Center.

The family of Della Mae Kaiser created this Life Tributes page to make it easy to share your memories.