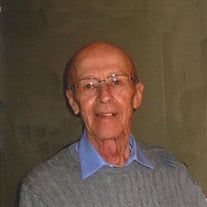 Dean G. Renz, age 89, of Colfax, WI passed away Friday, April 27, 2018 at his home, with family by his side. He was born Feb. 22, 1929 in Chippewa Falls, WI and grew up on his grandparent’s farm in Modena, WI. He later moved with his family to Eau Claire and attended Amy Grade School and Eau Claire High School. At the age of 17, he joined the U.S. Navy and served two years, then joined the U.S. Army and served three and a half years, including one year in Korea during the Korean Conflict. On Nov. 22, 1952, Dean married Helen Knudson at Holden Lutheran Church in rural Colfax, WI. Two daughters were born to this union, Debra Kay on Aug. 25, 1954 and Vicki Jean on Nov. 5, 1957. Dean worked at Uniroyal for 39 ½ years. He enjoyed spending time with family and friends; working on home projects and morning coffee with his buddies. Dean is survived by his wife Helen Renz; daughter Debra (Steve) Johnson; grandchildren, Lindsay (Lisa) Johnson, Nick (Jodi) Johnson, Tessa (Ryan) Gibson, Ryan (Christina) Larson, Trevor (Lacey Logslett) Larson; great-grandchildren, Audrina and Beauden Johnson; brothers-in-law, Robert, Stanley (Donetta), and Gordon Knudson; sisters-in-law, Arlene Knoepke, Patsy Knudson and Julie Renz; as well as other relatives and friends. He was preceded in death by his daughter Vicki Kinnard; son-in-law Joe Kinnard; parents, Henry and Anna Renz; his grandparents; brother George Renz and brothers-in-law, Milton, Layton and Kenneth Knudson. Funeral services will be held at 11:00 a.m. Tuesday, May 1, 2018 at Holden Lutheran Church in the Town of Grant, Dunn Co. WI (rural Colfax) with pastor Matt Saarem officiating. There will be visitation at the church one hour prior to the service on Tuesday. Burial will be in the church cemetery with military honors by Russell-Toycen American Legion Post 131. Olson Funeral Home in Menomonie is serving the family. The family would like to give a special thank you to the Mayo Clinic Hospice staff for their compassionate care.

The family of Dean G Renz created this Life Tributes page to make it easy to share your memories.