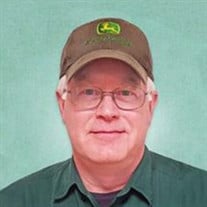 David R. Prestebak, age 63, passed away unexpectedly on Saturday, September 19, 2020. Dave was born July 15, 1957 in Durand, WI to Perry and Janet (Aebersold) Prestebak. As a child, Dave moved to Menomonie and was a life-long resident. He graduated from Menomonie High School in 1975 and attended Chippewa Valley Technical College where he earned a degree in Agricultural Mechanics and met his future wife, Lynne Cameron. On June 24, 1978, he married Lynne, a long-time employee of Mayo Clinic Health System-Red Cedar. On June 17, 1984 and July 3, 1986 respectively, Dave and Lynne welcomed their two sons, Drew and Spencer, who were the most important part of his life. On August 25, 2015, Dave and family welcomed their beautiful granddaughter, Raeden. Dave worked at several local agricultural businesses in Menomonie and ended his career after 28 years at Tractor Central. He was well liked and respected by many of his long-term customers who meant so much to him. Dave was devoted to his career and had plans to retire in December 2020. Dave also served in the Wisconsin Army National Guard for 24 years where he retired as a 1st Sergeant in both Menomonie and River Falls. Dave was a devoted father, husband, and grandfather. He enjoyed riding his Harley, going on trips around the country with his wife, antique and gun collecting, being outdoors, working on various projects both inside and out, and spending all the time he could with his family, especially his granddaughter. Dave is survived by his mother, Janet Nuenke; his wife, Lynne; his children, Drew and Spencer (Nicole); his granddaughter, Raeden, his brothers, Leslie and Daniel, a stepbrother, Raymond (Sharon) Nuenke, a stepsister, Julie Sims, and a stepbrother, James (Susan) Nuenke. He is also survived by several nieces and nephews and other relatives and friends. Dave was preceded in death by his father, Perry Prestebak; and his stepfather, Carl Nuenke. Due to the resurfacing of the Olson Funeral Home parking lot, visitation will be held at The Menomonie Alliance Church gymnasium from 4:00 p.m. to 7:00 p.m. Thursday, September 24, 2020.

David R. Prestebak, age 63, passed away unexpectedly on Saturday, September 19, 2020. Dave was born July 15, 1957 in Durand, WI to Perry and Janet (Aebersold) Prestebak. As a child, Dave moved to Menomonie and was a life-long resident. He graduated... View Obituary & Service Information

The family of David R. Prestebak created this Life Tributes page to make it easy to share your memories.