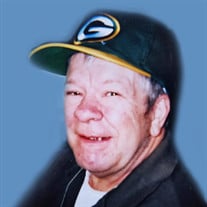 David “Micky” McDonough, age 68, of Menomonie, WI formerly of Wheeler passed away Thursday, December 24, 2020 at American Lutheran Home in Menomonie. He was born April 26, 1952 in Mondovi, WI to Floyd and Audrey (Markey) McDonough. He moved with his family to the Wheeler area in 1958 where he attended Wheeler Elementary School and graduated from Menomonie High School. Micky lived in Wheeler until 1996 when he moved to Menomonie. Due to his disabilities this was the first he lived on his own, of which he was so very proud. He lived at Galloway Homes for 21 years and managed very well. Micky worked part time at Exit 45, which he so enjoyed and so proud of the job he did, until he could no longer work due to health reasons. In 2017 Micky moved to the American Lutheran Home. He was very friendly, everyone he met was a friend. He enjoyed people, always greeting them with “Hi, how you doing” and never forgetting a name. For those that drove 9th Street you’ll remember him as the little guy that walked and always waved as you drove by. He had a great love of sports, especially for the Packers, Badgers and Brewers. He had an amazing memory for facts and stats both current and past. He amazed many with this ability. Micky lived a simple life. He had an amazing acceptance of life and had a unique way of making you smile! The family would like to thank those that have been so kind and thoughtful of Micky throughout his life. Also, thank you to the American Lutheran Home staff for the wonderful care and love they have given him. He would say “they’re all my friends and they take good care of me” and they did to the end. Micky is survived by his brother Edmund (Ruth Larson) McDonough of Leesburg, FL; sisters, Sharon (Larry) Hoff of Roberts, WI and Wendy (Tom Goodell) Turner of Wheeler; also, nieces, nephews, other relatives and many friends. He was preceded in death by his parents; brothers, Larry, Ron, and Allen; sister-in-law Janet McDonough; brother-in-law Tim Turner; nieces, Elise Waller, and Loren Roos. There will be a public visitation from 12:00 noon until 1:30 p.m. Monday, Dec. 28, 2020 at Olson Funeral Home in Menomonie. A private funeral service will be held at 1:30 p.m. Monday, Dec. 28, 2020 at the funeral home with Pastor Bob Koepp officiating. Burial will be in Our Savior’s Lutheran Cemetery in the Town of Hay River, Dunn Co. WI. The service will be live streamed to Olson Funeral Home’s Facebook page @ www.facebook.com/OlsonFunerals

The family of David "Micky" McDonough created this Life Tributes page to make it easy to share your memories.