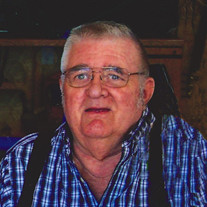 David LaVerne Klatt “Rocky”, age 77 of rural Downing, WI, passed away quietly on Monday, May 1, 2017 at St. Mary’s Hospital in Rochester MN, with his family around him. David was born June 29, 1939 in the Town of Stanton, Dunn Co. WI to Arnold and Margaret (Gesche) Klatt. He grew up on the family farm in rural Downing and graduated from Glenwood City High School with the class of 1957. David was a member of the Wisconsin National Guard in Menomonie from 1957 until 1963, and served active duty in 1961. In later years he became an active member of American Legion Post 168 at Glenwood City, WI serving as Commander for several years as well as other elected positions. On July 15, 1961, David married Sandra Stoner. They had two children, Lisa in 1962 and LaVerne “Butch” in 1963. He worked for Berg’s Chevrolet in Menomonie and then at G.T.C. Auto Supply Company until 1968 when he purchased a farm in the Downing area and enjoyed the farm life for 30 years. After retiring from farming David worked at Douglas Hanson Manufacturing in Woodville for ten years and made many friends on the job there. His wit and sense of humor will be remembered by his family and friends. He loved his family and was known for giving his nieces and nephews nicknames of his liking. Going north and spending time fishing at the cabin was a favorite outing as well as his Alaska and Canada trips. He was an avid John Deere toy tractor collector and Vikings fan. He also enjoyed being a member of the Menomonie Motorcycle Club for several years, where lifetime friendships remain. David was a lifelong member of St. Paul’s Evangelical Lutheran Church, where he was baptized, confirmed and married. He loved being a farmer, seeing his crops grow and appreciated God’s work in nature. David’s family will miss his jokes and teasing at the family get-togethers. David is survived by his wife, Sandra; daughter, Lisa (Gilbert) Krueger; grandchildren, LaRissa Krueger, Krista (Garrett) Gorres, Chaise Klatt, Chelsie Klatt (Travis Turner) and their mother Wendy Klatt; his brothers, Gary Klatt and Eugene (Debbie) Klatt; sisters, Shirley Huey, Sharon (Bert) Lansing and Joyce (Dan) Hellendrung; sister-in-law Judy Klatt; also survived by nieces, nephews, other relatives and friends and special friend Lee Kegan. He was preceded in death by his parents; one son LaVerne “Butch” Klatt; a brother Wayne, infant brother and sister, Valgene and Darlene; and sister-in-law Ardy Klatt. Funeral services will be held at 11:30 on Saturday, May 6, 2017 at St. Paul’s Evangelical Lutheran Church in Menomonie with Pastor Brett Voigt officiating. There will be visitation from 10:00 a.m. until the time of service at the church on Saturday. Burial will take place at Tiffany Cemetery in Boyceville with military honors. Olson Funeral Home in Menomonie is serving the family.

The family of David L. Klatt created this Life Tributes page to make it easy to share your memories.