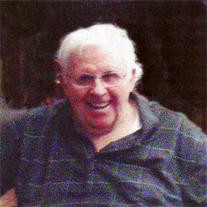 David Dean Clark, age 76, of Eau Claire, WI passed away Thursday, Aug. 28, 2014 at Country Terrace in Altoona. He was born August 21, 1938 in Menomonie, WI to Clinton and Harriet (Millar) Clark and grew up on the family farm. He graduated from Menomonie High School in 1956 and joined the U.S. Air Force for four years. David was married in1962 and they had two sons, Steven and Robert, and was later divorced. He then became an engineer traveling the world building power plants. Some of his favorite places were California; Carlsbad, New Mexico; Greenland; Kwajalein Marshall Island; Cuba; and New York. David married Judy Hughes Lohman in November of 1979 and her two children were added to the family. They had twenty some more moves before retiring in 2002 in Eau Claire, WI to be near family and friends. The last two years David has resided at Country Terrace in Altoona. The family would like to give a special thanks to his care givers and hospice nurses. David is survived by his wife, Judith of Eau Claire; his children, Karen Daum of Ohio, Steven (Nena) Clark of Illinois, Robert Clark (Nester Vik) of Eau Claire, Mike Lohman (Jason Rushing) of Texas; seven grandchildren, Jessica, Joshua and Joel Daum, Kimberly, Kristopher, Kannon and Kurtis Clark; three great-grandchildren; brother and sisters, Jean Krumm of New Richmond, WI, Nancy (Richard) Maki of Mounds View, MN, James (Ann) Clark of Phoenix, AZ, Karen (Larry) Smith of Boyceville, WI; a brother-in-law, Kurt Bents; he is also survived by many nieces, nephews, other relatives and friends. He was preceded in death by his parents, Clinton and Harriet Clark; one sister, Marilyn Bents and a brother-in-law Neil Krumm. Funeral services will be held at 12:00 p.m. (noon) on Tuesday, Sept. 2, 2014 at Olson Funeral Home in Menomonie with Hospice Chaplain Allen Biere officiating. There will be visitation from 10:00 a.m. Tuesday until the service at noon. Burial will be in Christ Lutheran/Halvorson Cemetery in Menomonie.

David Dean Clark, age 76, of Eau Claire, WI passed away Thursday, Aug. 28, 2014 at Country Terrace in Altoona. He was born August 21, 1938 in Menomonie, WI to Clinton and Harriet (Millar) Clark and grew up on the family farm. He graduated from... View Obituary & Service Information

The family of David D. Clark Obituary created this Life Tributes page to make it easy to share your memories.