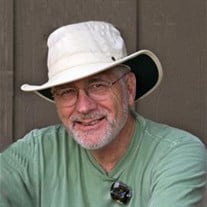 Daniel George Riordan, Menomonie, died on April 29, 2017. He was born March 19, 1944 in West Bend, Wisconsin, the son of Clarence James Riordan and Ione Amelia Schmidt. He grew up in Waukesha, Wisconsin, where he attended St. Joseph Grade School and Catholic Memorial High School. In 1966 he received a Bachelor of Arts degree in English from St. Edward’s University in Austin, Texas, graduating valedictorian, and earned a Master of Arts and a PhD in American Literature (1973) from the University of North Carolina in Chapel Hill, on an NDEA fellowship. In the summer of 1964 he met Mary Annis Palmer while working as a summer employee at St. Mary Resort in Glacier Park Montana. He and Mary were married in St. Paul, Minnesota, on December 28, 1967. In 1970 he began his career at the University of Wisconsin-Stout, retiring from there in 2010. He taught freshman English, American Literature and Technical Writing, and served as Chair of the Department of English and Philosophy. Later he helped found the Nakatani Teaching and Learning Center, eventually serving as the Director. He also helped begin the Bachelor and Master degrees in Technical Communication. During his career he served for many years on the board of the Council for Programs in Technical and Scientific Communication, including one term as president. Over the years he received a number of awards, including Outstanding Faculty for Minority Students twice as well as awards from the Council for Programs in Technical and Scientific Communication, Association of Teachers of Technical Writing, the Society of Technical Communication, and the Center for the Advancement of Teaching and Learning. When he received the last award, he said, “Loving and respecting your students is the key to all successful teaching.” When he was diagnosed with cancer in 2007, he decided he would live with it, but give his energy, his joy, and his time to living fully, in the moment. He loved his family, and included many people in that circle. Always interested in trying new adventures, his strategy was to read about it, try it, read more, do it, and then teach others what he learned. As a volunteer, he taught photography, genealogy, and the night sky. He loved to hike, canoe, photograph, and travel. Highlights included hiking in the American and Canadian Rockies, canoeing and camping in the BWCA and Quetico Provincial Park, kayaking in the Arctic, researching and discovering family to visit in Europe, and rock climbing. His philosophy was “Be curious! What you learn is yours forever.” He was preceded in death by his parents and a sister, Mary Claire (1942-1942). In addition to his wife he is survived by his children, Nate (Shana Goldman) of Seattle, Clare, Simon (April) and Jane all of Minneapolis, five grandchildren, Zoë, Will, and Alice of Minneapolis and Talia and Avital of Seattle, two brothers Michael James (Joanne) of Waukesha, Wisconsin, and Timothy Howard (Mary) of Cincinnati, Ohio, and numerous nieces and nephews. The family is grateful for the skilled care of the Mayo staff, especially Dr. Deyo-Svendsen, Dr. Basu, the Cancer Center, Urgent Care, Day Surgery and Hospice. In lieu of flowers please donate to a charity of your choice or to Stepping Stones of Dunn County or The Bridge in Menomonie. A celebration of Dan’s life will be held at 1:30 on May 27th at the Congregational Church in Menomonie. Olson Funeral Home in Menomonie is serving the family.

The family of Daniel G. Riordan created this Life Tributes page to make it easy to share your memories.