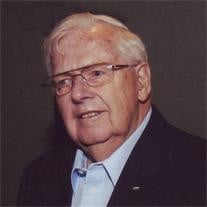 Dallas E. Chryst, age 88 of Menomonie, WI passed away peacefully Thursday, Nov. 21, 2013 at Mayo Clinic Health System-Menomonie with his family by his side. Dallas was born to Neil and Hazel Chryst on April 9, 1925 in St. Paul Park, Minnesota. The family moved to Wisconsin in approximately 1933. He was one of five children born to that union. The Chryst family lived in various locations in the City of Menomonie settling on 9th Street. Dallas attended Central Grade School and graduated from Menomonie High School in 1944. Upon graduation from high school, Dallas served his country in the US Army obtaining the rank of Staff Sergeant. Dallas married his high school sweet heart, April Grutt, on June 12, 1949. From that union they had two children, Michael Dallas and Marcia Jean. After discharge from the Army, he worked for Indianhead Truck Line as a driver and then dispatcher. From there, he bought a livestock truck and hauled livestock for a number of years. Dallas spent the majority of his life in sales. He sold cars, heavy equipment, trucks and was able to realize a dream by owning his own business, Chryst GMC. Dallas served the community he lived in for many years. He was on the Menomonie City Council, in the Jaycees, was a past President for the Menomonie Chamber of Commerce, a founding member of the Menomonie Kiawanis Club, served 28 years on the Dunn County Board of Supervisors and was a past President of the Mehara Shrine Club. While an active member of the Mehara Shrine Club, he served in many capacities including driving children to the Shriner's Hospital and drove the bus for the Tin Lizzies. Dallas was also a member of the Masonic Lodge. Dallas and April loved to travel and were able to go to Hawaii, Las Vegas, Branson, Nashville, the Virgin Islands and were lucky enough to fly on the Concorde to London. For 11 years, they spent the winter's months in Fort Myers Beach, Florida. In his later years, Dallas drove bus for Menomonie Transportation and the van to the Shriner's Hospital for Children. Dallas is survived by his wife of 63 years, April, a daughter Marcia (Ron Finder) and the joy of his life, his Grandson, Jason. He is also survived by two sisters, Joelene Loew (Allen) and Jackie Dotseth (John), a brother-in-law, Merlin Grutt (Lorraine), a sister in law, Marjorie Chryst along with nieces and nephews. He is also survived by two furry 4 legged friends, Mia and Chloe. He was preceded in death by a baby brother, his parents, his son Michael, a brother, Dwayne, a sister in law and brother in law, Wes and Alvria Schultz and two of his beloved dogs, Shasta and Sable. There will be visitation from 11:30 a.m. to 2:30 p.m. Tuesday, Nov. 26, 2013 at First Congregational Church – UCC in Menomonie. A public Masonic Service will be held at 2:30 by Menomonie Lodge 164 F. & A.M. followed by a Celebration of Life at the church, with Pastor Rob MacDougall. Burial will be Christ Lutheran-Halvorson Cemetery in Menomonie at a later date. Olson Funeral Home in Menomonie is serving the family.

Dallas E. Chryst, age 88 of Menomonie, WI passed away peacefully Thursday, Nov. 21, 2013 at Mayo Clinic Health System-Menomonie with his family by his side. Dallas was born to Neil and Hazel Chryst on April 9, 1925 in St. Paul Park, Minnesota.... View Obituary & Service Information

The family of Dallas Chryst Obituary created this Life Tributes page to make it easy to share your memories.