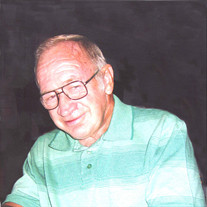 Dale Ronald Skillings, 79, of Menomonie, passed away Tuesday, October 11, 2016, at the American Lutheran Home in Menomonie, WI. Dale suffered from the debilitating effects of Parkinson’s Disease since his diagnosis in 1993. Dale was born on July 8, 1937 to George and Orpha (Sumpter) Skillings in the Town of Dunn on the family homestead near Dunnville, WI. It was there that Dale would grow up, graduating from the Dunn County Agricultural School in 1955 and continue to work the family farm. Dale married the love of his life, Kathryn Kaye Husby, on November 6, 1965, at our Savior’s Lutheran Church in Menomonie. Together they farmed the family homestead until their retirement in 2000. During those years, they were blessed with two sons, Ronald Dale and Randy Duane. Dale collected toy tractors and also collected old John Deere tractors. He loved to wash and wax (and this is no joke) his tractors and machinery often. Farming and working hard was in his blood and he did so up until the day he could not anymore, often cutting wood on his hands and knees when he no longer had use of his legs. Cutting wood was one of his favorite past times! He loved to ride around and visit the neighbors, while looking at the crops. Visiting neighbors was often a way of thanking them for looking out for him, as many times the neighbors had helped him through a predicament or two and through his failing health. A few close neighbors, meant a great deal to Dale. Through all Dale’s adversity, he never complained. There was always someone out there who had it worse than he did. He had numerous hip, neck and spine surgeries and each time would fight his way back into the seat of the skidsteer, tractor or 4-wheeler until the Parkinson’s didn’t allow him to do so anymore. His sons and his grandchildren were his greatest joy. He loved to talk about them and their activities with anyone who would listen. Dale is survived by his wife of 50 years; Kathie, two sons, Ronald (Heidi), and Randy (Angie) both of Menomonie; four grandchildren, Cody, Isabella, Samuel and Macy; a brother, Daniel (Marg) Skillings; two sisters, Irene Cotts and Lorraine Cotts, all of Menomonie; sister-in-law, Dorothy Skillings; brothers-in-law, Robert Jensen, Ronald Husby, Vaughn (Janet) Husby, Michael (Ann) Husby, all of Menomonie, James (Jan) Husby of Eau Claire, John (Melva) Husby of River Falls, and many nieces, nephews and other relatives and friends. Dale was preceded in death by his parents, George and Orpha Skillings; one infant brother, Delvin, brother Donald Skillings; sisters, Marlys Jensen, Wanda Mortel; four brothers-in-law, Darryl Cotts, Stan Cotts, Brownie Mortel, and Bill Husby; sisters-in-law, Jean (Rich) Nelson, Maryruth Dahms, Carole (Bob) Stratton, Joan (Bud) Myers and Correne Husby. Funeral services will be held Friday October 14th at New Hope Lutheran Church in Downsville, WI, at 11:00 a.m., with visitations Thursday, October 13th from 4 p.m. to 7 p.m. at Olson Funeral Home in Menomonie and also one hour prior to the funeral service at the church on Friday. Pastor Dale Moe will be officiating. Burial will be at the Evergreen Cemetery in the Town of Dunn immediately following the funeral service.

Dale Ronald Skillings, 79, of Menomonie, passed away Tuesday, October 11, 2016, at the American Lutheran Home in Menomonie, WI. Dale suffered from the debilitating effects of Parkinson&#8217;s Disease since his diagnosis in 1993. Dale was... View Obituary & Service Information

The family of Dale R. Skillings created this Life Tributes page to make it easy to share your memories.