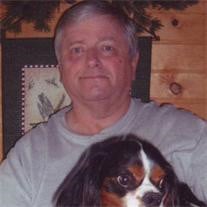 Dale A. Schindler, age 61 of Menomonie, WI died Wednesday, November 13, 2013 at Mayo Clinic Health System, Eau Claire with his wife by his side. Dale went to heaven after courageously dealing with several illnesses over the years. Dale was born July 24, 1952 in Dunn County Wisconsin to Louis and Audrey (Moss) Schindler. Dale graduated from Colfax High School and on May 3, 1975, he married Carol A. Reidt at Our Saviors Lutheran Church in Menomonie, WI. They bought land west of Menomonie, tore down the old home that was there and built their new home in 1978 where they have resided since. He worked many years for Tri-State Genetics which later became Accelerated Genetics; serving the farming community in Western Wisconsin. Dale had also been employed as an Agriculture Specialist selling for O&R Implement of Menomonie. Dale was always willing to help people and was a very giving, forgiving and understanding person. He and Carol shared "everything" whether it was good or bad. They loved going camping and taking "road trips" to places just to check out the area. They met new friends at their camping spots in the Frederic and Cumberland area. He loved children and always had a sense of humor for everyone. In the past, Dale enjoyed deer hunting, bowling and fishing and to this day enjoyed his Packers, Badgers and Nascar. His two dogs brought Dale much comfort and companionship through his illnesses. He is survived by his wife, Carol of Menomonie; mother, Audrey of Colfax; one sister, Sharilyn (Jim) Perko of Eau Claire; three brothers, Norman (Judy) of Sand Creek, Arlan "Joe" (Cheri) of Tilden and Bruce (Laura) of Colfax; mother-in-law, Janice Reidt; two sisters-in-law, Susan Fedderly and Lori (Tom Larson) Sabby; three brothers-in-law, Robert Reidt, Dennis (Diane) Reidt and Donavon, Jr. (Linda) Reidt; He is also survived by many nieces, nephews, very special friends, and especially his two dogs, Annie and Dickens. He was preceded in death by his father, Louis; and one brother, Delbert. Funeral services will take place at 11:00 a.m. Monday, November 18, 2013 at Our Savior's Lutheran Church in Menomonie, WI with Pastor Heather Wigdahl officiating. Visitation will be held from 4:00 to 7:00 p.m. on Sunday at Olson Funeral Home in Menomonie and also one hour prior to the service at the church. Interment will follow the service at Mamre Cemetery, Twp. Menomonie, Dunn County, WI.

Dale A. Schindler, age 61 of Menomonie, WI died Wednesday, November 13, 2013 at Mayo Clinic Health System, Eau Claire with his wife by his side. Dale went to heaven after courageously dealing with several illnesses over the years. Dale was... View Obituary & Service Information

The family of Dale A. Schindler Obituary created this Life Tributes page to make it easy to share your memories.