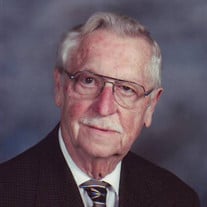 Dale L. Kregness, age 90, of Tampa, FL, formerly of Menomonie, WI, passed away Friday, February 20, 2015 at Baldomero Lopez State Veterans Nursing Home in Land O’ Lakes, FL. He was born August 18, 1924 in Menomonie, WI to Len and Lillian (Mitchell) Kregness. He graduated from Eau Claire Senior High School in 1942. Dale was a P.F.C in the U.S. Army Sig. Corp. in WWII, and was awarded several medals. He was employed as a Pressman by Shedd-Brown for 34 years until his retirement in 1985, and also served as a Lieutenant in the Sheriff’s reserves in Eau Claire County. He was active in scouting and served as Scoutmaster in the Boy Scouts. He also served as Commander of VFW Post 305 in Eau Claire. Dale enjoyed camping and fishing in Chetek, traveling, and was an avid woodcarver. Dale married Maxine Wagstad July 2, 1949 in Eau Claire. They were members of Hope Lutheran Church in Eau Claire until moving to Menomonie. Dale is survived by a son David (Christel) Kregness of Menomonie, a daughter Mary Peterson of Tampa, FL, grandchildren Adam Peterson, Jennifer Gatchel, Kent Clark, and Grant Clark, and great-grandson Ashton Siren, all of Tampa, FL, and his precious dog Peggy. He was preceded in death by his parents and his wife, Maxine Funeral services will be held at 2:00 p.m. Friday, February 27, 2015 at Olson Funeral Home of Menomonie, with Diaconal Minister Heather Kistner officiating. Burial will take place at Rest Haven Cemetery, Washington Township, Eau Claire County with military honors. There will be visitation one hour prior to services on Friday.

The family of Dale L Kregness created this Life Tributes page to make it easy to share your memories.