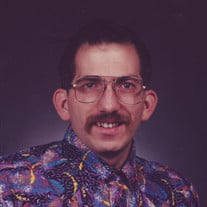 Dale Allan Eichmann, age 56, Menomonie, WI passed away Friday, December 4, 2020 at HSHS St. Joseph’s Hospital in Chippewa Falls, WI. He was born Sept. 22, 1964 in Menomonee Falls, WI to Clarence and Marlys (Mitlyng) Eichmann. At the age of four, he moved with his family to Menomonie, WI where he spent most of his life. He was handicapped, but still worked for Jim’s Spirit Shoppe, Bill’s Distributing and U.W. Stout where he excelled and made many friends. Dale enjoyed camping with his family, and he enjoyed spending New Year’s Eve with his nieces and nephews. He would have a very nice party for them and paid for everything. They called him Ike at school and work and the name stuck. He loved his grandmother and grandfather Mitlyng very much and was always at their place. His grandmother was a strong Christian influence in his life. Dale’s mother was also his Sunday School teacher. He was a longtime member of Christ Lutheran Church in Menomonie. Dale is survived by two brothers, David Eichmann (Lisa Terzinski) and Douglas Eichmann; a sister Cheryl (Rick) Hintzman; nieces, Susie Blaisdell and April (Jonathan) McCracken; nephews, Andrew Eichmann (Jess Hilmanowski) and Michael (Jessica) Hintzman; great-nieces and great-nephews, Kaylee, Ameera, Gavin, Baron, Ryleigh, Temperance, Ingrid, and Nikolaos; as well as other relatives and friends. He was preceded in death by his parents, Clarence and Marlys; his grandparents, Axel and Martha Mitlyng and Fred and Katie Eichmann; many aunts, uncles and cousins. Private funeral services will be held at 10:00AM on Wednesday. Dec. 9, 2020 at Christ Lutheran Church in Menomonie with Pastor Randy Skow-Anderson officiating. Services will be live streamed to the Olson Funeral Home Facebook page. Burial will take place at Christ Lutheran/Halvorson Cemetery in Menomonie. In lieu of flowers donations can be made to Christ Lutheran Church in memory of Dale. Olson Funeral Home in Menomonie is serving the family.

The family of Dale A. Eichmann created this Life Tributes page to make it easy to share your memories.