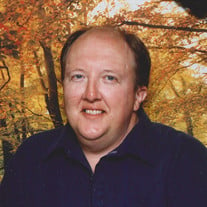 Craig P. Etlicher, age 55, of Chippewa Falls, WI passed away Friday, May 17, 2019 at his home. He was born December 9, 1963 in Barron, WI to Sidney and Marie Etlicher. Craig graduated from Brown Institute of Minneapolis in 1983. He worked for several years in radio and then transitioned to woodworking. He loved designing and building things that would last for years to come. He married Debbie Berg on August 25, 1984. Together they raised two children in Holmen, WI. Craig loved spending time with his family. Being a husband, parent, and grandparent were his greatest joys. He loved ice fishing, riding motorcycles, camping, traveling, watching the Vikings, politics, music, music festivals and trivia. His love of music trivia earned him the name “Rock Trivia God”. Growing up he had a passion for scouting. Along with his son, he volunteered with Pack 91 in Holmen for several years where he was a scout den leader and committee chair. Along with his dad, Craig was also a volunteer with the Sand Creek Fire Department. Craig is survived by his wife Debbie, son Christopher, daughter-in-law Kelly, and grandson Henry of Menomonie, daughter Renee of Chippewa Falls, mother Marie of Bloomer, brothers, David (Peggy) of Colgate, Joel of Eau Claire; and sisters, Kathy (Mike) Miller of Madison, Jeanne (Mike) Ehrhard of Altoona and Ann (Paul) Neidermyer of St. Croix Falls. He was preceded in death by his father Sidney and his grandparents. There will be a gathering and celebration of Craig’s life at Sand Creek Riverside Park from 4:00 to 6:00 p.m. Thursday, May 23, 2019. A Time of Remembrance will be held at 6:00 p.m. with Rev. Gregory Stenzel officiating. Olson Funeral Home in Menomonie is assisting the family.

Craig P. Etlicher, age 55, of Chippewa Falls, WI passed away Friday, May 17, 2019 at his home. He was born December 9, 1963 in Barron, WI to Sidney and Marie Etlicher. Craig graduated from Brown Institute of Minneapolis in 1983. He worked... View Obituary & Service Information

The family of Craig P. Etlicher created this Life Tributes page to make it easy to share your memories.