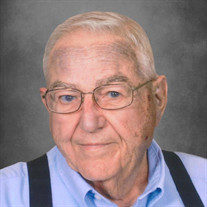 Clyde E. Smith Clyde Elden Smith was born on November 30, 1935, in Aberdeen, South Dakota. Clyde passed away peacefully on March 30, 2022, in Menomonie, Wisconsin. An avid card player who continually cracked jokes, Clyde always kept his family laughing. He also had a notorious sweet tooth, and made sure his family supplied him with cookies, candy, and ice cream up until the very end. Clyde spent his childhood living in the Midwest countryside, moving to El Paso, Wisconsin and Ellsworth, Wisconsin after his father returned from World War II. He attended Ellsworth High School, and it was there that he met the love of his life, Dianne Halls. After graduating Clyde joined the Army and was stationed in South Korea. Following his service, he attended the University of Wisconsin – River Falls. He and Dianne were married on July 1, 1955, and had two children Susan and Michael. After moving to Iowa and Minnesota, Clyde and Dianne finally settled in Menomonie, Wisconsin – or as Clyde called it, “God’s County.” Throughout his life, Clyde worked hard at everything he did. He founded C. Smith Realty, owning multiple buildings across Menomonie. A dedicated community member, Clyde committed nearly all his spare time helping out wherever he could. Over the years, he coached elementary basketball, American Legion baseball, and ran the Menomonie Little League. He was a proud member of the Moose Lodge, Masonic Lodge 164, American Legion and VFW. He also served on the Menomonie City Council and the Dunn County Fair Board. When he retired, he was a bus driver for Menomonie Transportation. Clyde was a fixture in the community and will be sorely missed. Clyde is survived by his children; Susan (John) Leschke and Michael (Mary Frances) Smith of Menomonie; grandchildren Lauren (Craig Brown) Smith of Manchester, New Hampshire, Samuel Smith of St. Paul, Minnesota, Madeline Smith of Lonsdale, Minnesota; nephews Walt (Sharon) Alms of Austin, Minnesota, Tom Halls (Eileen) of Ellsworth, Wisconsin and many other relatives and friends. He is preceded in death by his wife of over 50 years, Dianne, his parents Donald and Madeline Smith and his sister Janice Alms. A Memorial Service will be held at 11:00a.m on Thursday, April 7, 2022, at Christ Lutheran Church in Menomonie, Wisconsin with Pastor Cheryl Matthews officiating. Burial will be at Christ Lutheran Halvorson Cemetery with military honors performed by the Menomonie Veterans Honor Guard. A visitation will be held 4:00-6:00p.m. on Wednesday April 6, 2022, at Olson Funeral Home with a Masonic Service at 6:00p.m. by Menomonie Masonic Lodge 164. There will be an additional visitation one hour prior to the Memorial Service. In lieu of flowers, Clyde’s family requests any memorial donations to be made to the Neighbors of Dunn County, for the purchase of a new bus.

The family of Clyde E. Smith created this Life Tributes page to make it easy to share your memories.