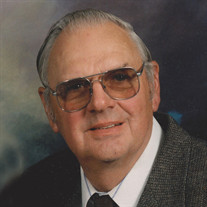 Clifford Wilmer Wendt, age 82, of Menomonie, WI passed away in his sleep Wednesday, Nov. 8, 2017. He was born April 23, 1935 in Menomonie, WI to Gustav Wendt and Lulu (Hess) Wendt. He grew up and attended school in the Menomonie area. Clifford married Carol J. Cale on August 20, 1954 at Christ Lutheran Church in Menomonie. Clifford was employed at the John Deere shop and South Side Auto Body as an auto mechanic in his early years. He then worked for the City of Menomonie as a mechanic and heavy equipment operator until he became Park Superintendent. He retired as Park Superintendent in 1992 after 17 years in that position. In addition to his employment he had a business producing parts for antique motor scooters which he did until he turned 80 years old. He was a founding member of the Red Cedar Classic Car Club, charter member of the National Cushman Club of America and charter member of the Doodle Bug Scooter Club of America based in Webster City, IA. He enjoyed participating in and camping at the Iola, WI car show each year. Other interests included attending auctions, participating in online auctions, traveling and spending time with his children and their families. Clifford is survived by wife, Carol; their children: Anthony Wendt of Baldwin WI, Cynthia (David) Kraemer of Eden Prairie MN, Tamara (Paul) Saunders of Midland MI. He is also survived by six grandchildren, five great-grandchildren, many nieces, nephews, and other relatives and friends. He was preceded in death by his parents, Gustav and Lulu; brothers, Roy, Allen, and Marvin and one sister, Lanett Marshall; as well as an infant brother Wilmer and infant great-grandson, Jack Stamper. Funeral services will be held at 11:00 a.m. Tuesday, November 14, 2017 at Little Elk Creek Lutheran Church in the Town of Red Cedar, Dunn Co. WI with Pastor Bob Friese officiating. There will be visitation from 4:00 to 7:00 p.m. Monday at Olson Funeral Home in Menomonie and at the church one hour prior to the service on Tuesday. Burial will be in Little Elk Creek Cemetery.

Clifford Wilmer Wendt, age 82, of Menomonie, WI passed away in his sleep Wednesday, Nov. 8, 2017. He was born April 23, 1935 in Menomonie, WI to Gustav Wendt and Lulu (Hess) Wendt. He grew up and attended school in the Menomonie area. Clifford... View Obituary & Service Information

The family of Clifford W. Wendt created this Life Tributes page to make it easy to share your memories.

Clifford Wilmer Wendt, age 82, of Menomonie, WI passed away in...