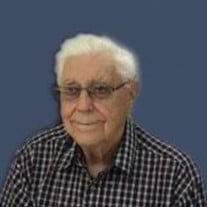 Clarence “Jack” L. Kothlow age 95 of Menomonie, WI passed away Thursday, June 3, 2021, at MCHS-Red Cedar in Menomonie. Jack was born on July 29, 1925, in the Town of Spring Brook, Dunn Co. WI to Edwin and Edna (Schaar) Kothlow. He was baptized and confirmed in Iron Creek Methodist Church. He attended Bountivale Country School and graduated from Menomonie High School in 1943. He was united in marriage to Anita Miller on September 28, 1950, and together they raised four children in the Christian faith. Jack was a long-time member of Peace Lutheran Church in Menomonie. Jack started out working on the family farm. He also took on roofing and siding jobs until he and Anita purchased the Kothlow home farm in the Town of Spring Brook in 1956. They lived there for 30 years before moving to Menomonie in 1980. Clarence was employed by the Menomonie Postal Service as a rural mail carrier from 1966 to 1989. Jack served on the Credit Union Board, Peace Lutheran Church Council and was director of the Federal Land Bank of Chippewa Falls for 23 years. He enjoyed bowling in a league for many years, his time with the coffee bunch, and socializing whenever possible. Most importantly he loved spending time with his family, especially attending the grandchildren’s sporting events. His love of farming never ended as he enjoyed going on country drives to see the crops, visiting with the farmers and seeing the farm equipment at work. He will be sadly missed. Jack is survived by his sons, Ron (Marge) Kothlow of Oakdale, MN and Steve (Gail) Kothlow of Menomonie; daughters, Diane Hintzman (Duane Lanwermeyer) of Colfax and Peggy (Rusty) Helland of Danbury, WI; grandchildren, Joel Dillon, Heidi Shadow, Hope (Rick) Burgraff, Erica Kothlow, Monica (Kyle) Wohnoutka, Matt (Callie) Helland, Travis (Ayla) Helland and Marcus (Taylor) Helland; step grandchildren, Elizabeth Brock, Bryan Brock; great-grandchildren Madeline (Spencer) Chermack, Morgan, Chevy, Isabella Dillon, Isaiah, Leah Shadow, Taylor, Victoria Burgraff, Kenna, Logan, Emmy, Blake, Jovie, Eliza, Bo and Deacon Helland, Carson and Cooper Wohnoutka; as well as other relatives and friends. He was preceded in death by his wife Anita; his parents; three brothers, James, Kenneth and Robert and his sister Mary Dix. The family would like to give a special thanks to the urgent care staff at MCHS-Red Cedar and Dr. Rich for his care over the years. Memorial Services will be held at 11:00 a.m. Wednesday, June 9, 2021, at Olson Funeral Home in Menomonie with Pastor Bob Friese officiating. Burial will take place at Peace Lutheran Cemetery, Menomonie. Visitation will be from 4:00 p.m. to 7:00 p.m. Tuesday and one hour prior to the service.

The family of Clarence "Jack" L. Kothlow created this Life Tributes page to make it easy to share your memories.